When Sadiq Khan was heckled at Regent's Park Mosque recently, it was small payback for his constant pandering to minorities who are not necessarily compatible with the Islamic faith.  You're just as likely to see him releasing a video message praising the contribution of Jews and Hindus as you are praising members of his own faith.  The truth is that Sadiq has strayed far from his roots, perhaps initially for votes, but it's now clear from his smug narcissistic exterior that he revels in adoration from sections of London society.  From white sneering middle class Remainers to drag queens and dildo waving gays, he is idolised and - if the polls are to be believed - nailed on for victory in May.  He knows this and appears to grow ever more smug about it.  Here he can be seen using trans lingo to mock his Conservative opponent Shaun Bailey at an LGBT event.


There were plenty of glowing tributes to Khan following his appearance at Labour's LGBT gathering on Thursday night.  He bared a hand written LGBT message on his chest and posed for photos with a variety of sordid characters, after which he retweeted numerous messages of support, some of which appeared to call on Londoners to vote for Khan simply because he was an LGBT 'ally'.  This is hardly a major policy area in which to attract support from the masses, but it makes the Mayor feel good about himself. 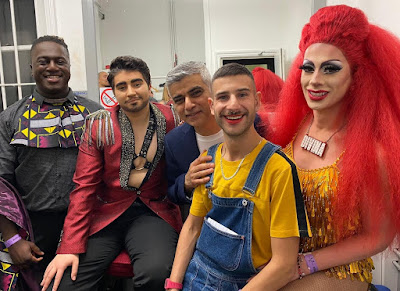 While Khan retains a huge loyal following in woke London, there will be many in forgotten London who won't countenance a vote for him in May.  In stark contrast to Khan's colourful and largely irrelevant embrace of identity politics, his Tory opponent can be seen on the streets with police officers and community workers.  It's not gone unnoticed that Khan is reluctant to even mention the word crime.  Cavorting with transvestites is not going to cut it with most voters, those who just want to feel safe when they leave their homes.  It's certainly not going to cut it down at the mosque either.

In a wide field of candidates with so many to choose from, many of those who won't vote Khan won't vote Bailey either.  In the end it will be the large majority of law abiding citizens who suffer while Khan's liberal merry-go-round of wokeness continues unchecked.
at February 29, 2020