Disgraced former MP Fiona Onasanya has decided to cash in on her short stay at Her Majesty's pleasure.  Following her conviction for perverting the course of justice she became the first ever MP to be removed from office by way of a recall petition.  She spent 28 days of a three month sentence inside HMP Bronzefield, but has now published a book bemoaning the hardships of prison.  The book, titled Snakes & Adders, does not refer to the recall petition that saw her thrown out of Parliament or the criminal act that led to it.  However, she does liken constituents and colleagues to venomous snakes in the introduction...


"Adders are Britain's only venomous snake but in the world of politics, I think there are two types which comes disguised as what I will call constituents and comrades!!  I am referring to constituents as those people who share your ideals and support your vision but do not necessarily support you.  Neither group should be considered confidants anymore than Adders should be considered ladders!"
(Fiona Onasanya)

In a damning review of the book, the Cambridge News likened the 122-page memoir to "a child's school essay" and noted that every chapter is punctuated with multiple exclamation marks.  Onasanya recalls the finest details and one excerpt is described by the reviewer as "so boring it's practically a work of art".  The final half a dozen chapters cover her short prison stay, during which she was treated to unimaginable horrors such as a lack of dairy alternatives and having to eat "measly meals like spaghetti hoops".  Did she think it was going to be like a bed and breakfast?  Her naive expectations were mocked accordingly by one inmate who ridiculed her request for almond milk or "soya if there's no alternative".  "This ain't Costa" her fellow convict shouted across.

Asides from the lack of quality food, Onasanya complains she rarely got a decent night's sleep and was shocked to witness another inmate dancing naked in the showers.  Oh, the horror.  It should also be noted that she continued to draw an MP's salary during her prison stay, raking in around £7,000.  Her refusal to resign also cost taxpayers an estimated £500,000 according to Peterborough City Council.  This was the cost of the recall process that ultimately led to her being sacked.

In addition to her removal as an MP she was also struck off as a solicitor, but is now embarking on a new career as a motivational speaker.  Let's hope she doesn't shock her classes too much with those horrendous tales of spaghetti hoops and lack of soy! 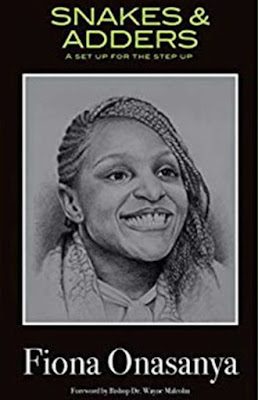 Onasanya Is Sacked
The House Of Shame
at February 22, 2020