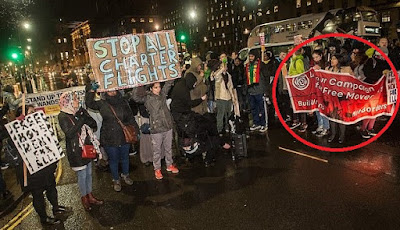 The deportation of foreign criminals to Jamaica has naturally received strong condemnation from the open borders enthusiasts of the left.  Labour MPs have voiced outrage inside Parliament while their supporters have protested outside.  In the above image you can clearly see the banner (right, circled) of the Labour Campaign for Free Movement.  This is a group dedicated to abolishing all border controls and allowing not only EU citizens to flow freely into the UK, but also potentially millions of economic migrants from the Third World, including the same brand of Islamist terrorists that have created havoc across Europe in recent years.

These zealots are so desperate to keep criminals and terrorists in the UK that they are prepared to sacrifice their own freedom in order to do so.  The Stansted protesters who prevented a flight taking off in 2017 later avoided custodial sentences in a judgement that would only embolden others.  One of the people they prevented from being deported was a murderer.  Last year another deportation was prevented by passenger on a Heathrow plane.  It later emerged that the Somali man they were so desperate to set free had raped a 16-year-old girl.

Labour activists and MPs have claimed that the criminals the government are currently trying to deport to Jamaica have only committed minor offences such as 'parking offences' and 'minor fights'.  These claims are as outlandish as the suggestion that this is somehow a racist decision made by a government of 'white people'.  The Home Secretary is Priti Patel, enough said there.

What's more, the Daily Mail reports today that the 17 Jamaicans successfully deported included two rapists, eight drug dealers, a burglar and others convicted for a variety of charges including firearms possession, robbery and serious assaults including wounding with intent.  They're hardly equatable to parking fines, but the facts don't appear to matter to Labour MPs like Diane Abbott, Dave Lammy and hard left newcomer Nadia Whittome.  It was Whittome who penned a letter to Boris Johnson demanding that the deportation flights be suspended while the 'safety' and 'human rights' of those affected be reviewed.  Her letter was signed by more than a hundred MPs and peers, overwhelmingly Labour, but also more than a dozen from the SNP, Plaid and Lib Dems.  Leadership contenders Starmer, Nandy and Long-Bailey all signed the letter (see below, click to enlarge).

If only Labour were as concerned for the rights of law abiding British citizens as they clearly are for the likes of foreign criminals, economic migrants, refugees and terrorists who they are so desperate to allow to roam free among us.  Perhaps if they were they might not have been punished so devastatingly on December 12th.
at February 11, 2020