The Provisional IRA detonated a huge truck bomb in London's Docklands, killing two people and injuring more than a hundred others.  Some of those injured suffered life changing injuries.  The high profile attack heralded the end of the IRA's seventeen-month 'ceasefire' (they still murdered ten people during this period).

The bomb had been placed inside a modified flatbed truck by the IRA's notorious South Armagh Brigade and put on a ferry to Scotland.  It was then driven down to Barking where a timer was attached.  The size of the bomb was estimated at between 1,000 lbs and 3,000 lbs, and contained a mix of fertiliser, sugar and Semtex.  There were several telephone warnings, but there was confusion as police were not aware that the ceasefire had ended.  A statement declaring the ceasefire over was given to Irish broadcaster RTÉ around 90 minutes before the bomb exploded.  Journalists were sceptical about its veracity and didn't carry the report in its 6pm bulletin.

Police arrived in the Docklands at around 6pm and began evacuating the area.  The truck was discovered around 50 minutes later, parked at South Quay Plaza.  Two men were told to leave a nearby newsagents, but made the fateful decision to lock up first.  The bomb exploded at around 7pm, creating a huge crater and devastating the surrounding office blocks.  The area was showered in broken glass, one woman was blinded in one eye and a man was left in a coma resulting in permanent brain damage.  The two men at the newsagents were buried in the rubble, their bodies not found until the following day.  The blast was so powerful it shook the Canary Wharf building and was heard across the city.  Three buildings were destroyed and the total cost was put at £150 million. 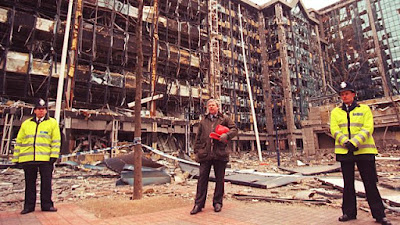 The two men killed were named as 29-year-old Inan Bashir and his colleague John Jeffries, 31.  Inan's mother, Hamida, later co-founded the Docklands Victims Association and spent more than 20 years campaigning for victims of terrorism across the world.  She passed away on New Year's Eve 2018.  An obituary was printed in the Belfast Telegraph.

The IRA blamed the police for the dead and injured, accusing them of not acting on "clear and specific warnings".  They also blamed the British government for the end of their ceasefire.

A man from Crossmaglen was later sentenced to 25 years for the bombing.  James McArdle was also a member of the South Armagh 'sniper team', responsible for the murders of nine British soldiers between 1992 and 1997.  He was sentenced to an additional 50 years for his part in this.  McArdle served just over three years and was released in July 2000 under the terms of the Good Friday Agreement.  He was not due for release until seven months later, but the Northern Ireland Secretary Peter Mandelson intervened personally to grant his early release.  The move was widely condemned.