The government is making some very promising noises at the moment.  The rhetoric surrounding post-Brexit negotiations, early release for terrorists, jobs for veterans and the environment is all positive and now we can add a couple of issues that have long been overlooked by both government and opposition.  When the Manchester grooming gang report came out a few weeks ago there was the usual deafening silence from the Labour benches, but there was no comment from the government either.  Step forward Labour MP Sarah Champion and the Home Secretary in a truly refreshing act of cross-party co-operation, albeit with Champion acting unilaterally. 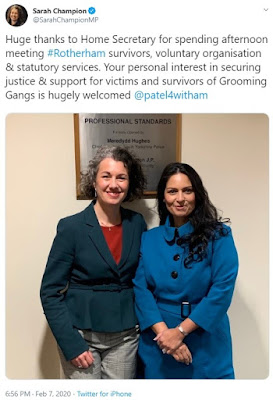 In any other situation, a Labour MP's decision to work alongside a Tory minister would result in an avalanche of leftist abuse.  However, hardly a single spiteful comment has been passed on Champion's glowing tribute to Priti Patel, not from Labour's balloon head membership anyway.  Patel also tweeted an account of the meeting and preceded this with a Home Office statement on another touchy topic no-one in high office ever talks about - female genital mutilation.

Up until last year this backward barbaric practice did not warrant a single successful prosecution in the UK, for the same reason that Muslim grooming gangs were covered up for so long.  Now the Home Office has released a new advert and an overhaul to their advice.

While a solitary FGM conviction and a cosy circle meeting in South Yorkshire is nowhere near enough to combating these disgusting crimes, at least they're now prepared to talk about them.  That's a start - and more than would have happened under a comrade Corbyn government.