SUE, YOU'RE SHOUTING AT TEA

Earlier today #SueYoureShoutingAtTea was bizarrely the number one trending hashtag on Twitter.  The leftist tantrum against Yorkshire Tea has yet to subside, despite the fact the company had absolutely nothing to do with Rishi Sunak's innocuous photo.  Even for the petty-minded childish morons of the left this is beyond a parody.

So, who is Sue?  She is just one of the thousands of idiots bombarding the company's Twitter account with messages of outrage.  However, the brand has turned the tables on Sue in a marketing coup d'état, leading to the hashtag #SueYoureShoutingAtTea taking Twitter by storm and exposing just how daft these balloon head leftists truly are.

According to the Huffington Post this was what Sue wrote initially: “The last thing I want to do when I’m making a tea is to think about what the Tory, who was blatantly advertising your tea, paid or otherwise, will be doing to continue to grow the rich/poor gap".  When Yorkshire Tea responded to the weekend's onslaught she had more to say and you can see the full exchange below, ending with the now infamous 'Sue, you're shouting at tea' masterpiece. 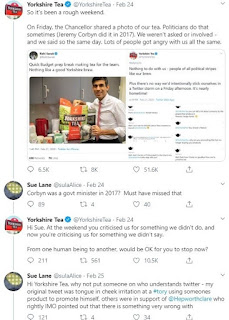 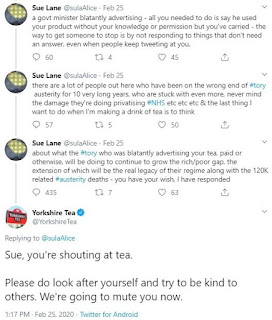 The line is so popular that some quick-thinking entrepreneurs have reproduced it on mugs and t-shirts.  Bit of a backfire there Sue!
at February 26, 2020