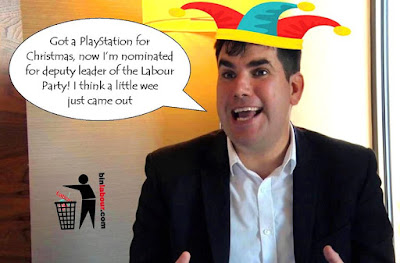 Richard Burgon is full of beans at the moment and getting a wee bit carried away with himself.  It sounds like he's immersed himself in the same Twitter bubble that convinced Corbynistas they were going to win the election.  Remember that Burgon only just scraped into the second stage of the nomination process achieving the bare minimum 22 nominations from MPs.  He did much better in the next stage and his fat head has grown bigger by the day.  He not only wants to maintain Corbyn's hard left policies, but wants them written into the party constitution and has a few daft ideas of his own.  He followed up his laughable 'peace pledge' by calling for his idol Corbyn to be given a front bench position after the leadership election is finally over.  It's no wonder Momentum is backing Burgon.

Now our Dickie is demanding that TV bosses arrange a deputy leadership debate.  The problem is that most viewers are not fussed about the main leadership debates, never mind who takes over as deputy - a largely symbolic role that has little relevance or political clout anyway.  Can anyone recall a single thing that Tom Watson achieved in his role as deputy, other than to chase imaginary paedophile rings, call for a 'people's vote' and generally make things difficult for his leader?  Still, Dickie's undeterred in his quest for power, and airtime.  He's written an open letter to the "heads of political programming" - because he couldn't be bothered to look up their names - and has told them that his "bold socialist vision" will be backed by "wider society".  Is that the same society that decisively rejected socialism on December the 12th?  No matter ye cynics, for Burgon has warned broadcasters that such ideas should not be "effectively silenced"...

Lovely letterhead there, but don't you think 'Dickie for deputy' has a better ring to it?
at February 18, 2020