Labour MP Chris Bryant has called on the BBC to sack a radio presenter after he compèred a Tory fundraiser.  Wynne Evans is a presenter on BBC Radio Wales, but is better known across the UK as the Go Compare tenor in TV ads.  On Tuesday night he hosted the Conservatives' annual Black & White fundraising event that included a rendition of Land of my Fathers between Evans and none other than the Prime Minister himself.


Reminiscent of the petty-minded cancel culture of the left, Rhondda MP Bryant expressed his outrage directly to Mr Evans' employers, telling the BBC:  "It's really simple, he's paid for by the licence fee, a public service broadcaster - he should keep his political views to himself, otherwise he should be sacked or resign.  He's a regular presenter on a BBC Wales show - it's absolutely basic".  The broadcaster responded by saying it had spoken to Mr Evans and told him he was not to accept similar bookings in future.

This wasn't quite the end of the story.  Former Welsh Conservative leader Andrew RT Davies had spotted some rank hypocrisy on the part of Bryant.  In November 2018 Bryant had tweeted in support of BBC presenter Gary Lineker hosting an anti-Brexit 'People's Vote' event.  Oops. 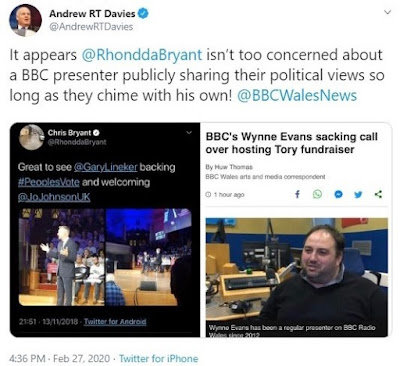 While Bryant is not on the hard left of the party, it appears that their intolerance for people with different views is rubbing off on him.
at February 27, 2020