COUNCILLOR HITS OUT AT "TORY PIGS"

A senior Labour councillor on Salford City Council is under investigation after posting an offensive message on a Conservative Facebook page.  Cllr Mike McCusker represents the Eccles ward, but is also a cabinet member responsible for planning, housing and development.  He wrote the post in response to a Conservative appeal for candidates in the forthcoming local elections.  Boundary changes mean that all 60 seats on the council are up for re-election in May. 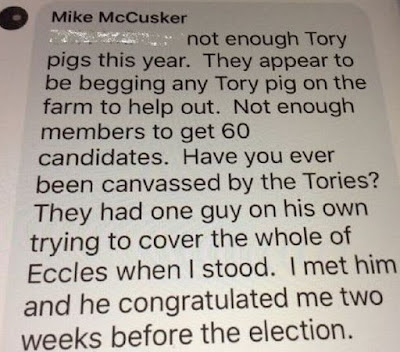 Salford's Tory group lodged a complaint over McCusker's comments.  He has since apologised, but said the post was taken out of context.  He told the Manchester Evening News that he posted the comment in response to another that read:  "In Salford a pig sporting a red rosette will be elected".  That comment was posted by a member of the public and referred to the fact Salford has always been a solid Labour council.  Going into the local elections Labour hold 51 of the 60 council seats, the Tories are currently on eight.

The news broke the day after hard left journalist/activist Ash Sarkar appeared on the BBC's Question Time.  Discussing the death of Caroline Flack she attacked the mainstream media, something that her old adversary Piers Morgan was quick to exploit... 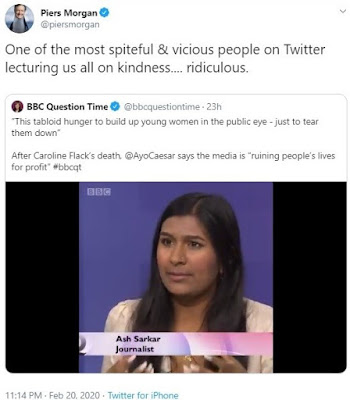 Cllr McCusker is now under a second investigation after another social media outburst in which he lashed out at Irish party Fine Gael.  He posted a picture of Fine Gael leader Leo Varadkar with the caption 'Bye' and then underneath remarked:  "I may have offended Fine Gail [sic] and Leo Varadkar with this post.  That was my intention you Blue Shirt bastards.  No apologies to you twats".  What an angry man!
at February 22, 2020