Several Welsh politicians have set up crowdfunding sites to raise money for those affected by the flooding in south Wales.  While it would be unfair to immediately dismiss such efforts as anything other than acts of selfless magnanimity, watching their exploits on Twitter suggests that self-promotion and virtue signalling is a key factor.

Take the exchange between Labour's Chris Bryant and Plaid Cymru's Leanne Wood.  One represents Rhondda at Westminster, the other represents Rhondda at the Senedd.  Bryant set up a 'Go Fund Me' site yesterday lunchtime, but two hours later Rhondda Plaid Cymru set up an identical site, promoted by Wood on her Twitter page.  Bryant was clearly affronted and suggested that Leanne Wood had ripped off his idea.  Trying to maintain the moral high ground he said he would be happy to "pool the funds". 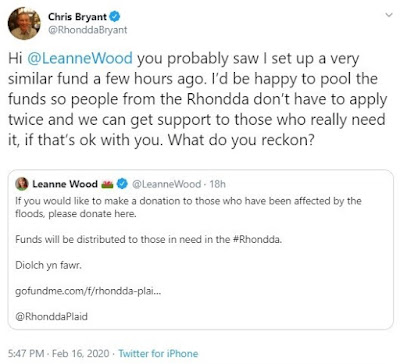 Half an hour later Wood responded, saying Bryant's proposal was "a great idea" and "no sense in duplicating".  Bryant gave her the thumbs up and the charade was over.  Naturally both campaigns are still up and running and neither side has bothered to act on their agreement.

Despite his uppity reaction to Wood's campaign, Bryant was not even the first to set up a crowdfunder for the flood victims.  Alex Davies-Jones, his Labour colleague in neighbouring Pontypridd, set up a site before either of them and what's more, she's so far managed to raise almost as much as the other two combined.  Perhaps if they spent more time sincerely gathering funds for those affected rather than squabbling over who takes the credit for it?