Treorchy (Welsh: Treorci) is a little market town in the Rhondda, population 7,500.  It's not exactly the kind of place you associate with marauding fetishists and rainbow flags, but next month it is due to host its first gay pride event.  We speak of 'fetishists' because the issue of bondage, or BDSM/sado-masochism, has apparently kicked up a storm in the Valleys. 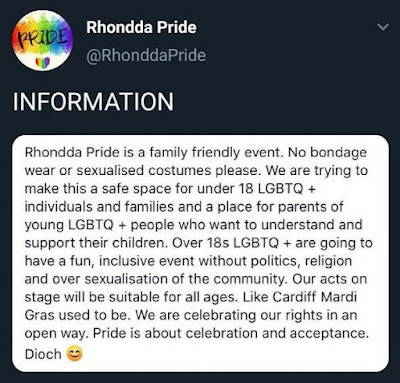 The Rhondda Pride organisers have now removed their social media accounts, such was the backlash.  A grovelling apology has also been forthcoming, although it's not now clear if the event will go ahead after all.  Probably best avoided now, considering every loon is going make a special effort to turn up as debauched and 'dildoed up' as possible.

Labour's Chris Bryant slammed the bondage ban and said:  "I am deeply saddened that the Rhondda may now be seen as an unwelcoming place".  Sorry Chris, but your constituents have tried to do something for the LGBT community that had never been tried before and you've slapped them in the face.  In any case how does a dress code make it 'unwelcoming'?  If some LGBT people feel the need to be as offensive as possible in a public space then surely it is they who are making the event unwelcoming - for people with young families!