Yesterday the Guardian published a rather hapless article in which it claimed that Jeremy Corbyn could win a caretaker vote by a majority of three.  However, the accompanying graphic suggested otherwise (see below). 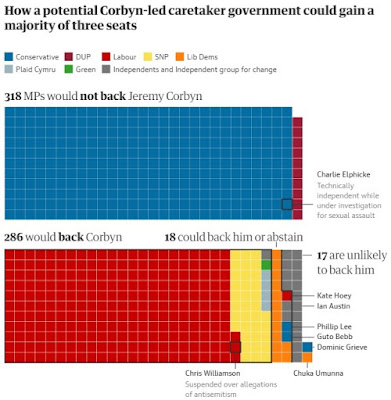 The graphic actually shows that Corbyn would fall well short, with 17 "unlikely to back him" and 18 who could potentially abstain.  The table draws some illogical conclusions.  There is no way that all but one Labour MP would back Corbyn.  John Mann has already indicated he would not support the vote of no confidence if it was aimed at stopping Brexit, so he's even less likely to support a Brexit-blocking Corbyn government.  Mann is not the only Corbyn critic either.  Very few independents would back Corbyn, in particular those MPs who have quit Labour since 2017, such as Ian Austin, Luciana Berger, Frank Field, Chris Leslie, John Woodcock and Chuka Umunna. 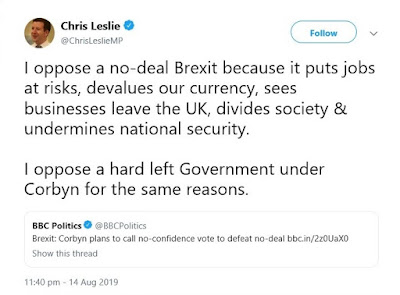 The Guardian is desperately clutching at straws.
at August 17, 2019