Mancunian leftist and occasional TV presenter Terry Christian has been ranting about Brexit yet again.  This time he had Jezza in his sights. 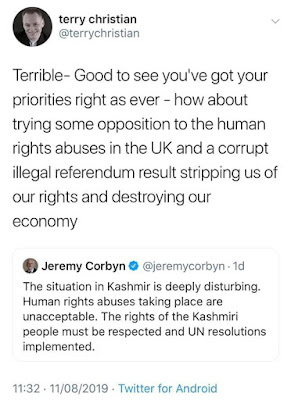 It's unusual for someone on the left to lash out at a comrade over their support for a foreign cause.  From Palestine to Cuba, Venezuela to Iran, the left can't spend enough time beating the drum for causes that have zero effect on the daily lives of British people.  So Christian has a point, although what the 'human rights abuses' he is referring to is anyone's guess.  He's no fan of Corbyn that's for sure and says he has "as much chance of winning an election as Elvis Presley on a unicorn".  Christian's resentment for the Great Leader is almost certainly linked to Corb's lifelong animosity towards the EU and his stubborn fence sitting on the issue.

Terry Christian is symptomatic of an increasingly desperate remoaner meltdown as Halloween approaches.  Despite the numerous Brexit-blocking plots being hatched in Parliament, many Remain fanatics are not convinced Boris can be stopped.  Their hate, spite and bile is going to get much worse as the clock ticks down and if November is not characterised by economic disaster, riots and starvation there will be even more tantrums. 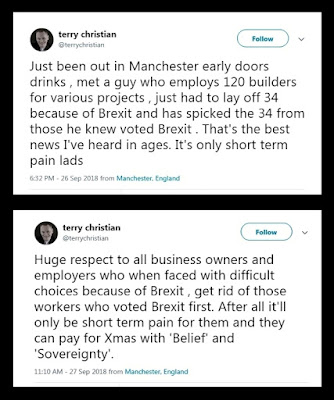