PIGS AT THE TROUGH: BARRY GARDINER 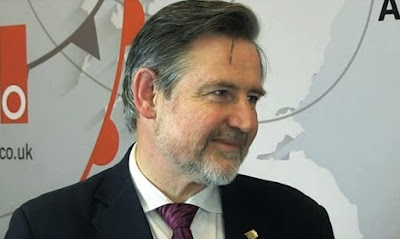 Softly spoken butter wouldn't melt Barry Gardiner, sometimes referred to as 'whispering' Barry Gardiner.  He is one of the few front benchers to have served under the entirety of Corbyn's leadership.  Born into a Glaswegian family, Barry's father was an amateur footballer and his mother a medical doctor.  He was grammar school educated and went on to earn a masters degree at the University of St Andrews.  A religious man, Barry intended to become an Anglican vicar, but gradually shifted into politics as his education progressed from Scotland to Harvard and Cambridge.  His relocation to Cambridge saw him join the Labour party and in 1988 he was elected to the local council.  He became the Mayor of Cambridge four years later and in 1997 was elected MP for Brent North.

Gardiner was implicated in the expenses scandal after having personally profited from the sale of his second home - at taxpayers' expense.  The fact that he had claimed for a second home was also controversial, as his constituency was located less than ten miles from Parliament.  The alleged scam was set up in 2002 when Gardiner purchased a large detached house in Chorleywood, a further 14 miles from Westminster.  This more than doubled the distance of his commute, although it was still only a 45 minute train journey.  The following year he purchased a flat in Pimlico, one mile from Parliament.  He designated this as his second home.

Gardiner bought the flat for £246,500 and over the next four years spent £11,000 of taxpayers' money renovating it.  In addition to paying decorators, plumbers and electricians, he claimed for a new kitchen as well as smaller items, such as £235 on Harrods bed linen and £248 for a Christopher Wray lamp.  This ran contrary to expense guidelines that stated that "extravagant and luxurious items" should be avoided.  He also appeared to flout rules that stated that the additional costs allowance should not be spent on "enhancing" the property.  In addition to the home improvements, Gardiner claimed around £1,000 each month in council tax and mortgage interest.

When the flat was sold in 2007 it went for £445,000, making Gardiner a cool profit of £198,500.  He defended his actions by claiming that the taxpayer had actually benefited because he had paid 40 per cent capital gains tax on the profit.  In response to the scandal he stated:  "If you do your arithmetic you may well conclude that the public purse has actually benefited from my purchase of a property rather than renting during this period."  However, he needn't have claimed for a second home at all due to the close proximity of his main home and constituency.  Gardiner was blatantly milking the system.  He was also accused of misleading the public when he claimed that he spent half the week "not seeing" his wife and children, despite the fact his wife was on his payroll as a secretary/office manager.

Barry's property shenanigans did not end with the Pimlico sale.  In 2008 he purchased another flat, this time within his own Brent North constituency (for the first time).  In buying this property he claimed £11,596 from the taxpayer in order to cover stamp duty and legal costs.  Once again he embarked on costly renovation and claimed £2,700 for building work and decorating costs.  Before he purchased this flat he had billed the taxpayer for hotel stays of up to £295 per night.

When the Telegraph exposed Gardiner in 2009 he was unrepentant and said he had acted "within the rules".  However, he was later asked to repay the paltry sum of £174.17 in relation to a mortgage interest claim.  What he actually paid back was more than £15,000.  A guilty conscience?
at August 20, 2019