Last week the Mayor of London lashed out against government proposals to reduce immigration post-Brexit saying any reduction would have "devastating consequences" for the city.


"If the government’s proposed immigration changes go ahead, then I’m fearful for the impact they’ll have on the fabric of our city.  The impact on the construction sector would make the housing crisis worse.  And the impact on public services, including our schools and the NHS, could have devastating consequences for years to come".
Sadiq Khan

As we know, the 'fabric' of London has already changed beyond all recognition.  It has the highest foreign-born population than any city in the world other than New York.  The English community is in retreat and the Cockney accent will soon be consigned to history.  London is the most populated city in Europe and it already houses more than four times the population of Paris.  We know Labour love to leave the door wide open to immigration, but Londoners must surely be asking how many more people can the capital accommodate? 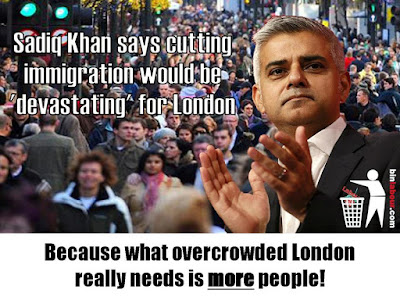