George Galloway's next attempt to break back into Parliament shouldn't really be keeping the incumbent awake at night, but Tom Watson is biting.  Realistically Galloway doesn't have much of a chance.  He is parachuting himself in as a pro-Brexit candidate in an attempt to capitalise on disenchantment felt within a strong Leave seat represented by an ardent remoaner.  However, unless the Brexit Party are prepared to stand aside it's a non-starter for him.

Remarkably, instead of ignoring Galloway and starving him of publicity, Watson has gone on the offensive.  Declaring that Galloway stands for "division and hate", Watson announced a crowdfunding campaign to fund his election campaign.  This came four days after Galloway set up his own crowdfunding campaign.  Bear in mind these are very wealthy politicians.  It's ironic that Watson should accuse Galloway of 'division and hate' when not so long ago it was revealed that he was pocketing hundreds of thousands of pounds from the former fascist Max Mosley. 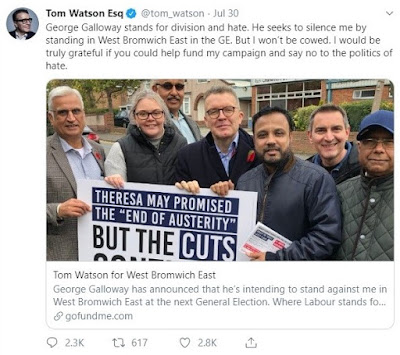 Watson also has a rather twisted interpretation of democracy.  Asides from his anti-Brexit stance being at odds with his 68% Leave voting constituents, he considers Galloway's candidature an attempt to 'silence' him.  No Tom, it's an election, don't be so insecure.  Perhaps Tom is feeling a bit threatened because he's way behind his challenger in the funding stakes.  Galloway is over half way to his target already, while Watson...