GOING AFTER THE QUEEN 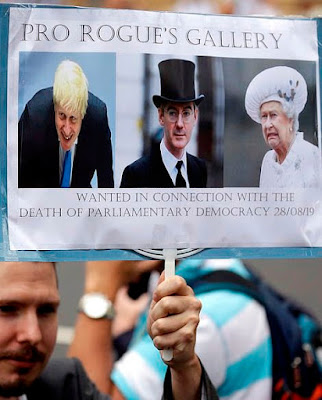 Following yesterday's announcement that Her Majesty had assented to the suspension of Parliament, remoaners lashed out at the monarchy.  On Twitter they managed to get #AbolishTheMonarchy trending, inspired in part by Labour MP Kate Osamor.  Osamor's tweet left little to the imagination, but she has this afternoon bemoaned the resulting headlines as "misleading" (see below).  She also described journalists as "rodents", clearly still bitter about the coverage of her son's drugs conviction and being forced to resign after it was revealed she tried to get him off. 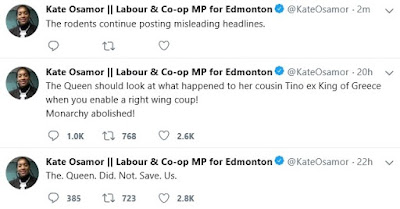 It'll be a plucky reporter that approaches her for a comment on these latest remarks.  Last year she threatened to smash a reporter's face in.  With the likes of Osamor, Onasanya and O'Mara this current Parliament really is the dregs.  Going after the Queen isn't going to win them any favours either.

It will be a massive own goal if these whiny spoilt quisling snowflake traitors want to start venting their tantrums at Her Majesty.  Elizabeth II is a hugely popular monarch and there is little public support for a republic.  Her Majesty currently has a 72% approval rating on YouGov, compared to 26% for millennial favourite Jeremy Corbyn.  So go ahead snowflakes, sound off at the Queen and see where it gets your cause.
at August 29, 2019