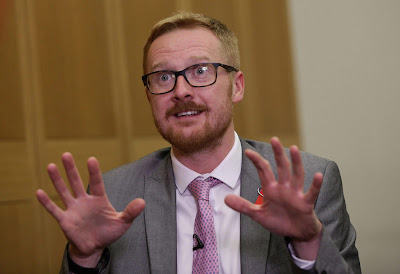 A Labour MP has been triggered by a prospective Brexit Party candidate 40 miles from his own constituency.  Lloyd Russell-Moyle (Brighton Kemptown) is upset that a former Labour councillor has been selected to contest the Hastings & Rye constituency at the next general election.  Tom Bewick served on Brighton and Hove City Council between 2015 and 2019 before standing down and quitting the party in protest at Labour's Brexit ambiguity.  Russell-Wotsit slammed Mr Bewick's candidature.

"He tried to stand against me in the selection for candidates in Kemptown.  He thought Kemptown wanted Brexit.  Tom, of course, ended up falling out with Labour because his views were at odds with the party.  He ran the Vote Leave campaign in Brighton and Hove.  I am sure the fine voters of Sussex will reject the Brexit Party’s nasty right-wing views.”
Lloyd-Russell Moyle (Lab, Brighton Kemptown)

It's highly doubtful that Mr Bewick thought Kemptown "wanted Brexit" seeing as that constituency returned a 56% Remain vote in 2016, perhaps that is why he is standing in Hastings and Rye where voters returned a 56% Leave vote.  Quite why Russell-Moyle is on his high horse about a candidate standing on the other side of East Sussex is anyone's guess, but if he had an ounce of foresight he should actually be encouraging the Brexit Party in its decision to target the seat.  Why?  Because the presence of a Brexit Party candidate would almost certainly deliver the seat to Labour.

Hastings and Rye is Amber Rudd's constituency, but she has one of the narrowest majorities in the country at just 346 votes.  By targeting Remainer Rudd the Brexit Party would wipe out that slender majority and hand the seat to Labour on a plate, a fact that is not lost on Mr Bewick himself who said: "I don’t approach my politics in terms of fearing a certain result, I approach it with what I want to do".

There really ought to be more co-operation between the Tories and the Brexit Party in any elections that take place before November, assuming we leave the EU at Halloween.  The lack of a Brexit Party deal has already cost the Tories a seat in Parliament thanks to the Brecon by-election.  If the UK leaves in October then the Brexit Party will probably all but disappear from British politics, but it would be vital in defeating Labour if a snap election were to be called before then.  A 'Brexit Alliance' would be a powerful defence to counter the 'Remain Alliance' that succeeded in Brecon.

It's imperative that these parties put the country first, rather than risk a Labour/SNP coalition government that would tear our country apart.
at August 06, 2019