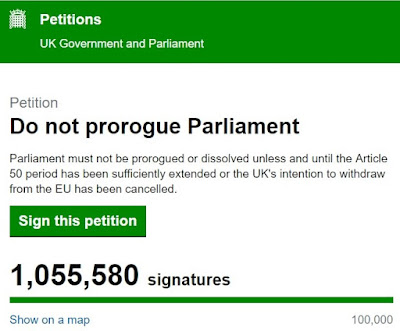 Remoaners currently bouncing off the walls of their rubber rooms have predictably turned to the government petition website to get their message across.  Helped along by media publicity, the anti-prorogation petition has quickly amassed more than a million signatures.  You'll recall that the media helped manufacture another big anti-Brexit petition earlier this year.  That petition included some rather dodgy signatures and it appears that this latest effort is no different.

Only British citizens and UK residents are eligible to sign government petitions and a postcode and email address have to be provided.  Yet strangely thousands of signatures are being collected from around the world, as shown below.  While many originate in EU countries, there are multiple entries from places as far apart as Brazil, China, Bermuda and Bahrain.


Perhaps finally the Remain lobby can smash the 17.4 million barrier, with a little help from Denmark, Greece and Fiji!
at August 29, 2019