A Twitter user has reported daft Labour MP Dave Lammy to the police over his latest Twitter outburst.  Dave was 'triggered' (or desperately seeking attention, depending on your interpretation) by reports that Boris Johnson could suspend Parliament ahead of Brexit. 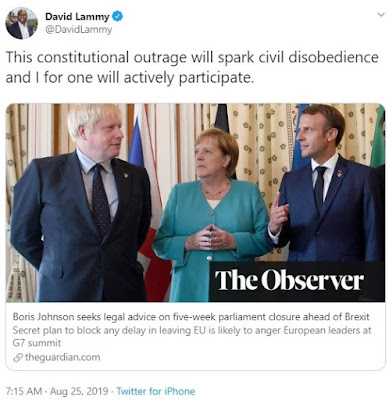 Lammy was not alone in expressing his 'outrage' at any suggestion that MPs could be hindered in their efforts to overturn the Leave mandate.  Fellow narcissist Jess Phillips sought to grab herself attention by using the f-word three times in one tweet.  However, Dave's announcement that he would 'actively participate' in civil disobedience led to Twitter user @SamuelJJack reporting him to the Met. 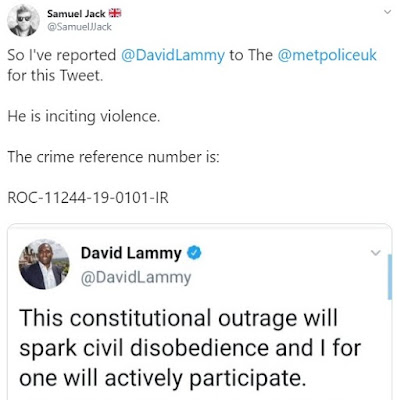 It's touch and go whether daft Dave will be receiving a visit from the old bill, as these days they tend to prioritise social media posts over burglary, but they are going to be very busy this week taking down all the Pride decorations.  Meanwhile, in the Twitterverse, Lammy couldn't resist having the last word and announced that Mr Jack was being a 'muppet' who could barely read.

So, to summarise, Labour MPs are furious.  They want to stop Brexit because they don't like the result.  One MP says he will take to the streets and break the law, another uses obscene language.  They label any efforts to stop them from stopping Brexit as "anti-democratic".  They have no perception of irony.
at August 27, 2019