Remember when Labour's Jess Phillips dumped her son on the doorstep of Number Ten?  It was such a shameless publicity stunt that some people were genuinely concerned for the child's welfare.  This week Jess has dragged her poor children along to more of her promotional stunts, albeit she appears to have told them it was a 'holiday'.  While in Edinburgh for this 'holiday' Jess managed to schedule herself for an appearance at the Edinburgh TV Festival where she spent 45 minutes chatting to fellow Brummie Joe Lycett on stage.  She also managed to find her way to a so-called 'People's Vote' event where she also spoke on stage.  Remarkably, she also got herself a live interview with Kay Burley on Sky News.  How the kids must be enjoying their family 'holiday'!

We're not sure when Jess arrived in Scotland, but two days ago she was pouring her heart out in the Times.  Once again she was using her own kin to further her self-publicity, this time her heroin addict brother.  Was he OK with this very public outing?  Did she bother to ask?

Jess Phillips is easily the most odious narcissist currently taking up the Labour whip, and that includes daft Dave Lammy.  Jess is absolutely loving herself. 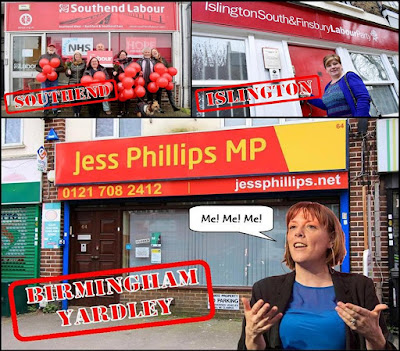