It's fair to say that has-been actor Hugh Grant was not best too pleased with the news that Parliament is to be suspended... 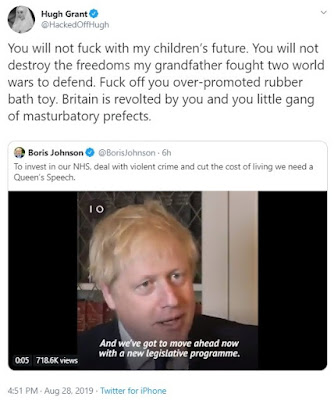 The logic is something to behold isn't it?  That is, unless his grandfather actually fought to have Britain sucked into a European superstate where it has no say in how it is governed.  Then again, if that was the case surely he should have been fighting for the Nazis?

Remoaner Hugh hasn't been very busy lately, in fact his last film was two years ago.  Ironically in that film, Paddington 2, he played a has-been actor who was reduced to filming dog food adverts.  At the moment real-life Hugh is reduced to ranting about Brexit.

For such a well-educated toff, one would expect better language and better grammar.  In one of his earlier tweets today he showed that he can't even spell 'fascism' - one of the buzz words of the left in 2019 ie. one whom is to the right of oneself.