The left have been busy both sides of the Atlantic blaming the US President for the recent mass shootings - predictably.  Of course there were no mass shootings under the Obama administration, no of course not!  Actually, there was San Bernardino (14 killed), Orlando (49 killed), Aurora (12 killed) and Charleston (9 killed) to name just a few.  Naturally we can all recall the outcry against Obama when they were happening.  Not.  The reality is that literally anything and everything negative is laid at the feet of Trump, man-made or otherwise.  Bad hurricane season?  Blame Trump!

One of the most viral tweets to do the rounds following the El Paso shooting a couple of days ago was a picture of a number of firearms arranged to spell "Trump".  Several accounts claimed that the image was taken directly from the killer's Facebook and/or Twitter page, suggesting that he had arranged the guns and taken the photo himself.  In truth the image has been floating around on the internet since January 2017 and various media outlets confirmed that no such image appeared on either his Facebook or Twitter page (both accounts are now deleted).

You would expect such a well respected and renowned journalist like Owen Jones (lol), to have checked the authenticity before retweeting such a baseless claim, but no.  Even Owen's own employers the Guardian rubbished the claims, saying at best the killer may have 'liked' a post featuring the image, but he neither created it or posted it.  Don't let the facts get in the way of some Trump-bashing eh wee lad? 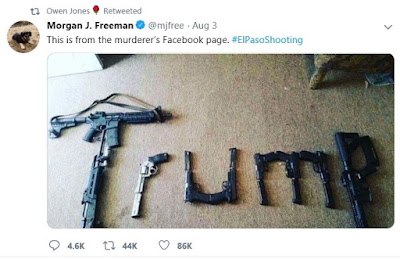