Three days ago Corbyn released a video on his Twitter account in which he goes full on Project Fear warning of "chaos" and a hike in food prices leading many fleeing to food banks in "desperation".  He says that Boris and his "millionaire friends" won't suffer like the "rest of us" - as if he Corbyn is one of us!  Many were quick to point out that Corbs is a millionaire himself, and not only that, but he is reportedly worth twice that of Boris Johnson.  While Boris is estimated to be worth around £1.6million, Jezza is reputed to possess a cool £3million fortune.  So much for the many! 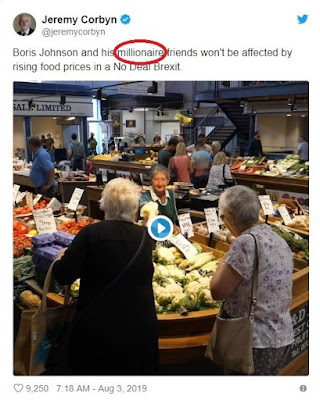 Today Corbyn reposted the same video, no re-edits, but there was one word (one letter in fact) sneakily altered in the tweet itself.  "Millionaire friends" had now become "billionaire friends".  It seems that Corbyn has quietly admitted that he is indeed one of the few.