Signing off for the night.  This is the fourth time I've done the overnight coverage this year, so please do feel free to show your appreciation by tapping the donate button on the right hand side.  Thank you and goodnight.

Ed Davey just said that the result shows that the people of mid-Wales don't want a no-deal Brexit.  Hang on sunshine, you and your party claimed victory after the European elections by combining Remain party votes.  So by your own logic didn't you actually lose tonight?  If we add the Tory vote to the Brexit Party vote...

So there we have it.  The Parliamentary arithmetic moves even further towards Remain, removing a Leave MP and replacing him with a Remain MP.  If the Tories had ditched Davies perhaps they'd have held the seat, but they would surely have done so if they had cut a deal with the Brexit Party.  The Lib-Dem's Remain pact with Plaid Cymru and the Greens won the day for them.

It's interesting to note that the Brexit Party appeared to be less damaging to the Tories than the Lib Dems were to the Labour vote.  The Labour vote more than halved from almost 18% in 2017 to barely enough to save their deposit.  It's another hugely embarrassing night for Labour.

Labour have saved their deposit by 0.3%.  Jammy.

This is hilarious, no media outlet is carrying the result because they don't have any Welsh speaking correspondents.

Lib Dems have won, but the presiding officer gave some results in English and some in Welsh so only Welsh speakers know the full result.

The declaration is expected in the next five minutes.

Lib Dems are cock-a-hoop, so it's clear who the winners are.  It will be interesting to see by how much they've won, what happens to the Brexit Party and crucially, how badly Labour have performed.

Hopefully the Lib Dem candidate (and probable winner) actually turns up.  Still no sign of her.

About an hour ago I said this photo was a bad idea for this precise reason...


Yes, on the one side is a joke party that puts up nutters as candidates and on the other is the Monster Raving Loony party. https://t.co/3En3bqMKHY
— Michael S Sturrock (@MichaelSturrock) August 2, 2019

Sky reporter just mentioned the word "re-count".  If that happens I'm off to bed.


I want to see the percentage of postal votes in Brecon compared to the Peterborough by-election 🤔#BreconByelection
— marc (@belizemarc) August 2, 2019

If, as expected, the Lib Dems win this contest, should we dare to add up the Tory/Brexit/UKIP votes and say that Leave won???

ITV reporter:  Brexit Party are happy with their likely third place and not worried about 'splitting the Brexit vote'.  Their aim is to remind the Tories they're there and willing to 'take them apart' if they don't deliver Brexit.

It sounds as if things are swinging slightly in favour of a Lib Dem victory.

Don't know who this guy is, but he claims to have letters after his name and has a very sound grasp of Corbynite mentality...


I’m sure Corbyn’s Army will celebrate #BreconByelection #wipeout following EU elections wipeout, as yet another “Victory” for #Corbyn & Labour! Never mind that Labour Party is led by a dud who has the vision & intellect of a hamster. Zero vision. Zero critical thinking skills. https://t.co/1u5Q6iVoWf
— Yemmi Agbebi, MBA (@yagbebi) August 2, 2019

There is NO DIFFERENCE between The LYING LibDems AND The RACIST Tories - They DO NOT Care About You!


Significant talk here about whether @WelshLabour have even held onto their deposit... In the same week as the party scored their worst-ever opinion poll result in Wales.

And no-one is blaming their candidate here in #BreconAndRadnorshire - these problems for the party go deeper.
— Prof Roger Awan-Scully (@roger_scully) August 2, 2019

Labour candidate Tom Davies:  “We know certainly from speaking to a lot of Labour voters, that some Labour voters feel that from looking at the previous history of the constituency and looking at the polling data from what we had beforehand that it’s safer to vote the Lib Dems so that Chris Davies doesn’t get back in”.


#BreconByelection
This is an impossible election for @Conservatives to win.
Not only are there no Plaid or Green candidates who would have got big numbers, but they are fighting Brexit party who'll take significant votes and their own candidate is a convicted fraudster!#Boris
— Graham Whitehead (@GrahamUKIP) August 1, 2019


Stood for a racist party. We wouldn’t describe the BNP candidate of handling his campaign with dignity. https://t.co/MHW6GJE9gq
— Euan Philipps (@EuanPhilipps) August 1, 2019

Dr Ed Poole from Cardiff University's Wales Governance Centre says this is the highest turnout in a parliamentary by-election since Winchester in 1997.

This is probably not the greatest idea for a photo op...


We may be from very different sides of the political spectrum but you have to love and respect them! They really brighten up the night. #BreconByelection #ravinglooneyparty pic.twitter.com/QhslHIOIIA
— Richard Taylor (@Richardwtaylors) August 1, 2019

Brexit Party candidate Des Parkinson told BBC Wales: "It looks as if we're running third at the moment.  Coming third is what we thought would happen when we arrived here this evening.  We've only been in existence for three and a half months".

If it's as close as many are suggesting the Tories will be kicking themselves tomorrow that they did not ditch their disgraced candidate and replace him with another Brexiteer.  A deal with the Brexit Party would surely have guaranteed them victory either way.


All the talk here is of a ‘total collapse’ in the Labour vote in Ystradgynlais - their strongest area in the seat - with the bulk going to the @LibDems #BreconAndRadnorshire #Breconbyelection
— Prof Roger Awan-Scully (@roger_scully) August 1, 2019

Lib Dem source tells Sky:  "The Labour vote is in deposit losing territory.  We will have been massive beneficiaries of that.  Lots bringing up Corbyn as a reason for switching to us on the doorsteps - more than just a tactical squeeze".

Labour candidate Tom Davies is speaking to Sophy Ridge on Sky.  Sophy is giving him some tricky questions, but he's handling it well.  Impressive posture, but he's freely admitting that Labour voters have largely drifted to the Lib Dems.

Apparently the Labour candidate has just arrived.  Not so much as a whimper.

Turnout is reportedly 59%.  That's impressive.  In Peterborough it was 48%.

The Monster Raving Loony Party make a low key entrance to the count... 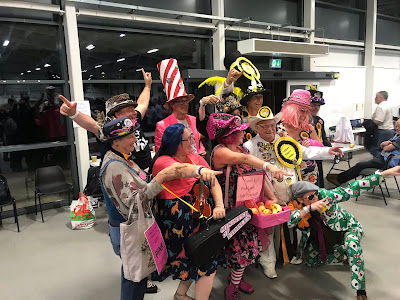 Chris Wilkins, the former director of strategy for Theresa May: "I think at this stage of the evening it probably looks like a Liberal Democrats gain, but maybe with a smaller majority than they would have hoped.  I think that will allow the new prime minister to say that he has managed to get the Conservative vote up and squeeze the Brexit Party vote".


'No-one is counting their chickens'

Big cheers at the count as a loony walks in.  No, it's not Jeremy Corbyn.  It's the Monster Raving Loony Party candidate.

Taking in lots of different sources it appears that the Tory vote has held up more than expected and they could push the Lib Dems close.


Senior Lib Dem source plays down any talk of a big win... "It will be close" #BreconByelection
— Jonathan Blake (@blakeyblogs) August 1, 2019

It just beggars belief that the Tories chose to stick with their disgraced candidate... 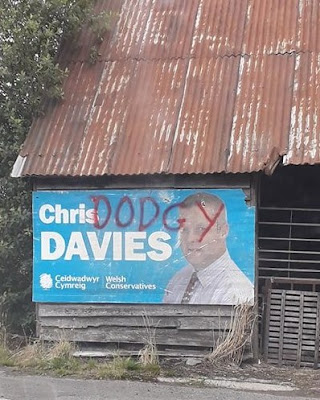 The constituency is so huge that the ballot boxes have apparently travelled an estimated 1,800 miles in total to get to the count in Llanelwedd.

It's taken almost one hour and 45 minutes to get all the ballot boxes in.  Thankfully the delay is due to the size of the constituency and rural roads (this isn't Peterborough again folks).


All the ballot boxes are here now in at the #BreconByelection - no mean feat as this is the largest constituency in England & Wales, the size of Luxembourg
— Sophy Ridge (@SophyRidgeSky) August 1, 2019 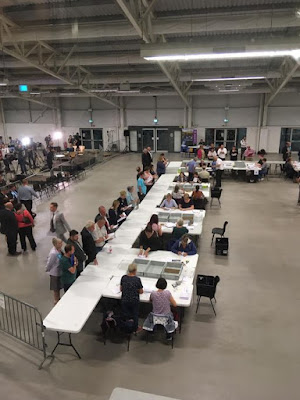 Not good news going forward for the Brexit Party.  Their survival depends on whether or not they can do a deal with the Tories in those crucial Brexit betrayal seats in the Labour heartlands...


The Tories are saying they think it will be tighter than they thought it was going to be, citing Boris Johnson as removing the reason for Brexit Party voters to back Nigel Farage's group.
— David Deans (@DeansOfCardiff) August 1, 2019


Huge constituency this. Still waiting for lots of batches to come in from outlying bits of the seat. 96 polling stations. Personally and from what I’m hearing: I think it’s going to be tight. A Lib Dem win- but tight #BreconByelection pic.twitter.com/aLU22Q16wN
— Lewis Goodall (@lewis_goodall) August 1, 2019

Conservative officials at the count are predicting a close vote tonight.  According to the BBC, one source said: "Tighter than we thought it was going to be".


Counting is underway in the #BreconandRadnorshire by-election. Both the Lib Dems and Tories think it will be tight. Result expected from 2:30am onwards @LBC pic.twitter.com/1mtlMgJSZ1
— Mike Hughes (@MikeHughesNews) August 1, 2019

Ex-Tory and Ex-Change UK's Heidi Allen actually campaigned for the Lib Dems in this election.  She's not yet signed up, but it sounds like there's a strong possibility she'll follow Chuka to party number three...


Trying to be relaxed about the counting now underway in #BreconAndRadnorshire but a win for @DoddsJane won’t just be a fantastic local result, it will also be a huge kickstart to @unitetoremain 🍿 😬 🤞 Come on!!!!
— Heidi Allen MP (@heidiallen75) August 1, 2019

Picture from the count.  Half expecting a cow to wander into the background. 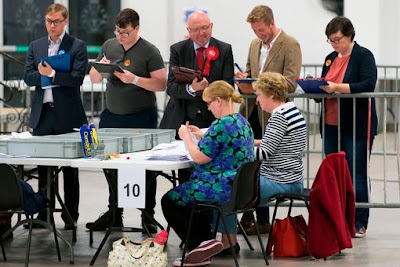 Doesn't this look more like Brexit Party blue?  Hmm, crafty.  Perhaps if the Tories had done a deal with the Brexit Party (like the Lib Dems did with Plaid) they wouldn't have to resort to things like this...

Estimates for a declaration are currently somewhere between 2am and 3am.

BBC correspondent just questioned whether Labour would keep its deposit.  That this is even mooted shows how bad things are for Corbyn and co.


Interestingly, Brecon and Radnorshire voted almost exactly the same as the country in the referendum 51.9% vs 48.1%.
— Lewis Goodall (@lewis_goodall) August 1, 2019

WalesOnline reports:  This is a tricky election for Labour.  It’s a seat they were never going to win.  However, those who have been on the ground say their traditional Labour voters are backing the Lib Dems.  Not because of Brexit or Jeremy Corbyn as you may expect but “overwhelmingly” because they are angry at Chris Davies’ criminal conviction.


I think you'll find tonight he is much loved by the people of #BreconandRadnorshire ! https://t.co/AhfPwzB2tj
— Cecilia Bartholemew (@CeciliaBTory) August 1, 2019

Lib Dem source tells the BBC they are "confident they can do this" but it is "not in the bag".

Locals have said the Lib Dems sent a lot of activists to help win the seat.  They told Sky News the area was “swarming” with them.

The count is taking place at the same venue as the Royal Welsh Show and it does look more like a cattle market than an election count! 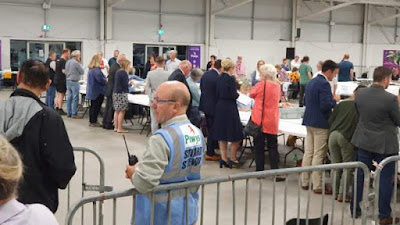