On Friday the Guardian published a predictably one-eyed forecast of how the big vote of no confidence vote could pan out.  The Daily Mail has conducted a rather more even-handed investigation, although like the Guardian they have overlooked John Mann.  The Labour MP has already said he won't back the no confidence vote if it is aimed at stopping Brexit (which it is).  The Mail claims that Boris 'loyalists' have identified 17 of their own MPs 'at risk' of backing a no confidence vote.  They are:

This list appears remarkably constrained.  Where is Caroline Spelman, one of the three Tory recipients of Corbyn's coup invite?  Where is weasly remoaner Sam Gyimah?  Will any of them actually have the brass neck to collapse their own government?  We will find out in just over two weeks from now.  The Mail's intriguing graphics can be seen below (click to enlarge). 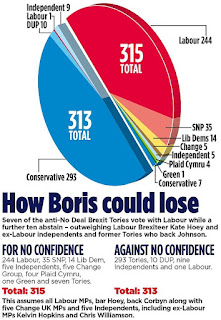 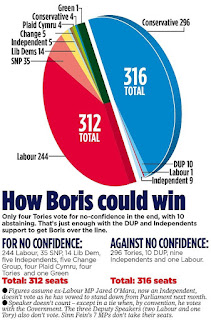