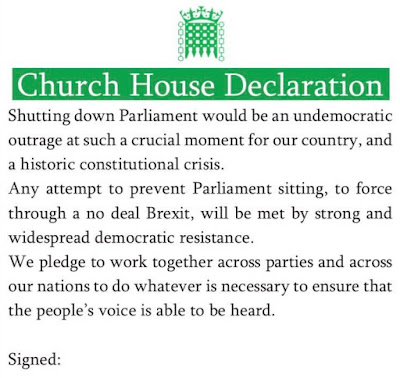 This is the vaguely worded declaration that Remain plotters signed today at their 'People's Parliament' event.  'People's Parliament' will be the hashtag and title for their attempted coup and follows the similarly misnamed 'People's Vote'.  Both have the exact same agenda - to overturn the Leave mandate.  It is not about stopping a no deal Brexit, it is about stopping Brexit full stop.  The 'people' to which they refer have already spoken and there is nothing democratic about trying to reverse the result.

The full text of Corbyn's letter as follows.

I am writing to you after convening a meeting earlier today with the leaders of other opposition parties on how we can work together, across Parliament to prevent a damaging No Deal exit from the European Union.  At that meeting, we agreed to make efforts to put party politics aside to find a way through the present crisis.

We know there is a majority in parliament against No Deal.  As MPs we’ve voted against No Deal on a number of occasions and we did so in the largest number on 27 March of this year.

As you were one of 116 Conservative or independent MPs who voted against No Deal that day and are not on the government frontbench, I am writing to you to offer to work together, in a collegiate, cross party spirit, to find a practical way to prevent No Deal.

This is an urgent task.  The Prime Minister is reportedly planning to suspend parliament to force through a No Deal crash out.  This action would be, according to legal advice I’ve received from Shadow Attorney General Shami Chakrabarti, “the gravest abuse of power and attack upon UK constitutional principle in living memory”.

My view is that holding a general election after an extension is achieved is the simplest and most democratic way to prevent No Deal and to let the people of this country decide our future.  Indeed, it is the best route to a referendum or leaving the EU with a deal.

I understand not all colleagues may agree.

So I would like to invite you to join a dialogue with myself, as leader of the Labour Party, and other opposition parties, to find a way for the clear will of parliament against No Deal to express itself.  Please respond by email.