Yes, this is actually trending on Twitter right now.  It appears that some mischief makers have taken advantage of Chris Williamson's plea for help in fighting for his Labour membership.  The suspended MP claims that he is being lined up for expulsion and says "legal action against the party machine is underway".  The obligatory crowdfunder is "coming soon".  Isn't it just amazing how quickly wealthy socialists start begging for other people's money when there is a lost cause to fight?

Chris's plea for solidarity has led to so much ridicule that the hashtag #ResignForChris is now trending.  One of the first to mock him was one of his own Parliamentary colleagues, Labour MP Neil Coyle.  Coyle suggested that Williamson should "get in the sea" after which a spat began (see below). 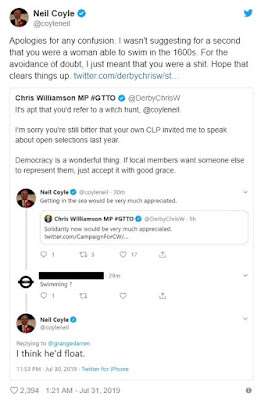 The handbags at dawn ended with Coyle blocking Williamson's account.  Williamson screencapped Coyle's block calling it "tragic".  Is that so Chris?  You were one of the first MPs to block our Twitter account.  Now that's tragic sunshine.

Another Labour MP also joined in the condemnation of Chris the Shit.  Rachel Reeves tweeted her disgust and said that he was "no colleague of mine".  It seems that poor Chris is about as welcome as a fart in a spacesuit on the Common's benches, but alas he is getting plenty of support from outside the Parliamentary party.  The Jew-baiting hard left just adore him and he is getting vocal support from commie media outlets such as Novara Media and the Canary, plus a handful of celebrities including film director Ken Loach.

However, support for Williamson has been somewhat undermined and overshadowed by the hilarious hashtag.  It's not difficult to spot the mischief that's been carried out.  The same picture of a cut up Labour membership card has been tweeted countless times by different people all claiming to have genuinely resigned in disgust.  There will almost certainly be some Labour activists and members who'll have fallen for it, but most have cottoned on quickly and are trying desperately to rumble the plotters and disrupt their antics by getting #JoinForChris trending.  Here's a quick selection featuring the #ResignForChris hashtag...

Like many supporters of @derbychrisw I am disgusted with the latest attempt to have him expelled from the party.

I have cancelled my Labour party membership and destroyed my card.

I urge all other supporters of Chris to resign from the party in protest too.#ResignForChris pic.twitter.com/WZuOTTjLY7
— Clare Quilty (@cquilty52) July 31, 2019

🥀I too am disgusted by the treatment by @UKLabour of a genuine socialist of national significance @DerbyChrisW and hereby #resignforChris #IStandWithChrisWilliamson #Chrisferatu #Jewbaitferatu. Time to cut up my card and stare at a hook-nosed mural for solace X pic.twitter.com/fxmSEVmPjR
— Yankele Harari (@Charlie66174695) July 31, 2019

It’s the right and just thing to do for all true socialists #ResignForChris pic.twitter.com/EhQrWPVafY
— Little Grey Dog (@littlegreydog1) July 31, 2019

#ResignForChris how can so many people cut the same card in exactly the same way and place the cut strips on the same table with identical arrangement??? 😁..... There is so much talent on twitter!
— A Quack (@aq_quacks) July 31, 2019

Whoever started the bullshit #ResignForChris, is no member of the Labour party and no friend of Labour. Don't fall for the bullshit of right wing trolls and manipulative pricks.
— Keith Ordinary Guy #NHSLove (@KeithCameron5) July 31, 2019

"I think I might make a stand and #ResignForChris , What do you think Brother Seamus??"

Loving that #ResignForChris is still trending. Naturally the Corbyn cranks are all over it now, screeching about it being a 'right wing plot'. It hasn't occurred to their tiny little minds that they're just keeping the hashtag going. Too good.
— rustinpeace (@rustinpeace00) July 31, 2019

PS.  If you go on Twitter today don't forget to use the hash #ResignForChris and spread the word!
at August 01, 2019