JESS IS LOVING IT

Little Owen and Jess Phillips have so much in common.  They are both hideous narcissists who crave attention to the point that we shouldn't really massage their egos by giving them the time of day.  It's the juicy traps they set that make it so easy to fall into.  Using your own child to further your hunger for fame is both cringeworthy and embarrassing for all involved, but that's just what she did yesterday.  Forget all pretences of this being a political protest, it was a publicity stunt for her own ego.  It's unclear how long her humiliated offspring was left on the doorstep of number ten, but we suspect it was just long enough for the cameras to get all the pictures they required while Jess did the rounds spouting her rubbish to any reporter who would listen.

"It's not just about my son.  It's about thousands of children across the country"
Jess Phillips

No Jess, it's nothing to do with your son, or anyone else's son.  It's about you.  It's always about you.  You're so fascinated with your own fame that you can't see the biggest hypocrisy of your latest stunt.  If it's all about austerity Jess, please tell us why it is we have austerity in the first place?  It was your own Birmingham colleague (neighbouring MP in fact) who signed off the infamous "there is no money" letter in 2010.  Your party bankrupted the nation and would surely finish us off it if it got another chance any time soon, particularly with the hard left at the helm.  In any case, isn't Labour responsible for running the schools in Birmingham? 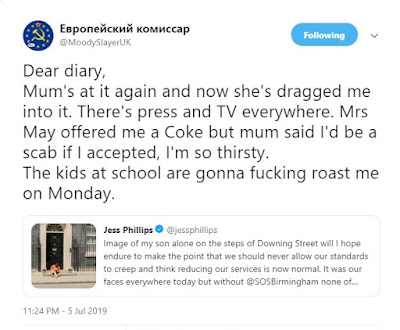