Commie journalist Ash Sarkar announced today that for the first time in her adult life she felt "really proud" of her country.  Obviously communists take no pride in their nation, so it couldn't have been anything particularly conducive to the national good.  It wasn't really.  Someone stole a police car. 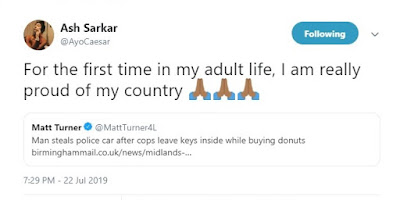 Imagine that this police car was half inched while Ash's beloved Corbyn was in Number Ten.  It wouldn't have been so amusing then and the culprits wouldn't have got off with a slap on the wrist either.  No-one messes with the police when they're run by communists eh, Ash?
at July 22, 2019