Daft Dave Lammy is in the news again, albeit not for something he's said.  A Tory councillor is in hot water over his response to Lammy's latest condemnation of the 'hard right' (which, incidentally, according to daft Dave is everyone who disagrees with him).  Cllr David Burgess-Joyce, of Wirral Council, took exception to Lammy's rant and devised one of his own (see below, tweet since deleted). 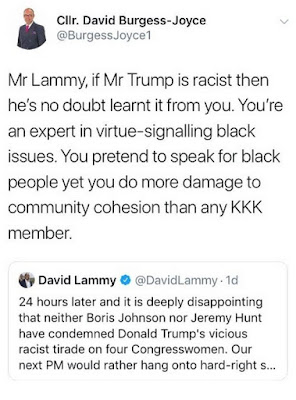 Cllr Burgess-Joyce has now been suspended from the Conservatives and media outlets are decrying his Ku Klux Klan reference as the headline feature.  Lammy himself has predictably denounced the councillor and called for the Tories to expel him.  Of course this is typical of spiteful Lammy, who as per usual fails to see the hypocrisy. 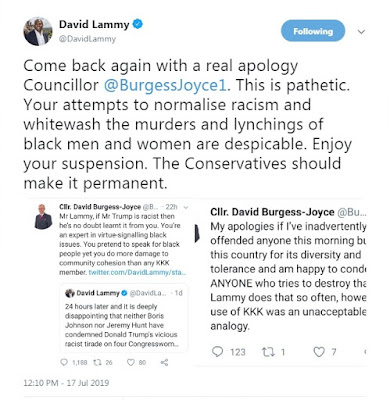 Not so long ago Dave Lammy was likening Brexit-backing Tories to 'Nazis' and when challenged about the comments by Andrew Marr he said the analogy was "not strong enough".  So, apparently it's acceptable for Lammy to use the analogy of Nazism when describing Tories, but when something similar is used against him the individual should be sacked.  What's more, didn't the Nazis kill 'slightly' more people and do a 'tad' more damage than the Klan?  Just saying, Lammy.
at July 17, 2019