The ability of the left to mobilise on workdays is famous.  Today is a little different as they've pencilled in their latest weekday exploits for 18:00 in the desperate hope that some actual working people will join them after their shifts.  The protest has been organised by the far left 'People's Assembly' and will take place outside Downing Street to protest against the incoming Prime Minister.  The great unwashed will hear from a plethora of speakers including little Owen Jones (who else?) and a number of Labour MPs (plus Caroline Lucas of the Greens, naturally). 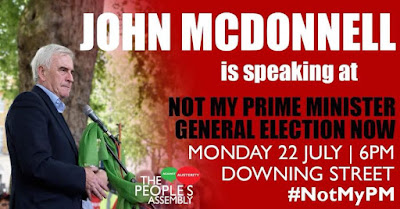 McDonnell will be joined by his Labour colleagues Dickie Burgon, Ian Lavery, Laura Pidcock, Emma Dent-Coad, Dan Carden, Karen Lee, Laura Smith and Danielle Rowley.  No doubt they'll all be demanding a general election on the basis that Boris is 'unelected'.  As they continue to beat the drum of this shallow argument we will continue to point out the glaring hypocrisy of their argument.  Gordon Brown wasn't elected PM either.

McDonnell, in particular, is more than familiar with the 2007 Labour leadership 'election'.  Brown wasn't even elected by his own party, let alone the electorate.  He was crowned Prime Minister unopposed.  The only other challenger was none other than McDonnell himself, albeit he failed to garner enough nominations to get on the ballot.  Maybe next time John.

Despite the impressive line-up of MPs planning to address the riff-raff, the Facebook page for today's demo has so far only attracted a couple of hundred people, despite the best efforts of little Owen and his incessant tweeting.  No doubt things will pick up throughout the day and the media will gleefully report organisers' estimates of one million protesters (again).  OK, well maybe not this time.
at July 22, 2019