Fear not lefties!  There is a saviour on the horizon and his name is Bone.  He is going to f*** Boris up so bad the Eton Mess will never even take office.  In fact you might say Boris is going to get boned (sideways, naturally).  So who is this brutal character to whom we refer?  Who is the badass about to take down the Prime Minister-elect where your own establishment safety valve/cowardly conformist fake Marxism has failed?  Well Corbynistas, it's this dude. 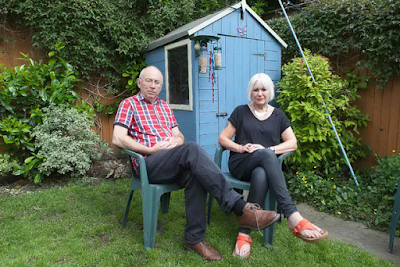 That's right, this middle class gammon-faced old duffer is going to stop Boris Johnson.  Of course we wouldn't dare call him 'middle-class' to his face as he'd take direct action all over our asses just like he roughed up Jacob Rees-Mogg last year.  That's right, because this is Ian Bone, the founder of the terrifying anarchist group 'Class War'.  Check out this still image from last year's violent confrontation between Bone and the rich elitist devil Rees-Mogg. 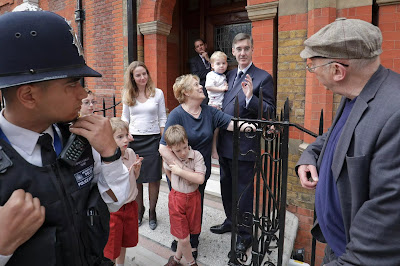 See the terror on the faces of Rees-Mogg and his family at the sight of this old flat-capped man turning up on their doorstep.  The copper (establishment foot soldier) is already radioing for back-up as he knows shit is about to go down.  Lol.

What actually happened was Ian Bone turned up and said some things to the Rees-Mogg children like "You're daddy is not a very nice man".  That's right, he didn't even shout or swear or throw anything.  So much for anarchy in the UK.  Of course it was still distasteful and excruciatingly embarrassing for all involved, but this is what passes for 'direct action' in Class War, apparently.  This, the group with a sinister skull and crossbones as its symbol, whose aim is to bring down the entire establishment order by any means necessary (well, they have the word 'war' in their name).

Despite all their tough talk online and offensive banners, there's little substance to this small group of misfits.  One of the their most recent protests took place outside the home of Boris Johnson and this allegedly resulted in one of their number receiving some injuries, at the hands of an estate agent according to Ian Bone's tweet.  You read that correctly - an estate agent.  Not exactly a well tooled footsoldier of the fascist regime is it?

To be fair to Class War they have undertaken some serious anarchist mischief this month, and yes, they have been burning property.  Their own.  With the looming appointment of PM Boris the boys and girls took to the streets of east London and burnt an effigy of the Eton devil.  I hasten to add that no damage was caused to any public property, or private property, and presumably a full risk assessment was carried out prior to the event.  There's just no stopping their anarchy.

The next Class War action will take place today outside Downing Street.  They're clearly not going to stand for PM Boris and their massed hordes are apparently going to block the street and stop him from entering Number Ten.  This 'mass demonstration' is due to take place at 17:30, so no doubt you'll see the chaos unfold live on the Six O'Clock News.  Ian Bone and his comrades will undertake this bold act "while the left somnambulists do f*** all" in his own words.  This is one of the curiosities of Ian Bone.  He demonises the left and calls them all the foul names under the sun, then slates them again when they don't turn up to support his protests.  It's a mystery Ian.

If the half a dozen or so members of Class War survive the great blockade of Downing Street today they will fight on.  They clearly expect to anyway as they've pencilled in another action for this November.  So, what violent anarchic exploits can we look forward to not reading about this autumn?  The big demo, on Ian Bone's calendar four months in advance, is titled 'Invading the playing fields of Eton'.  Sounds dastardly.  Wonder if they will tell anyone that their daddy is not a very nice man?