While Labour continues its preparations for the 'imminent' general election, former Labour MP George Galloway announced his own candidature yesterday.  George's latest attempt to break back into the Commons will take place in West Bromwich East where he intends to unseat Labour deputy leader Tom Watson.  West Bromwich East is notoriously pro-Leave (68 per cent in 2016) while its MP is notoriously Remain.  Although Galloway will be fighting on a pro-Brexit ticket, he is not standing for the Brexit Party and will be an independent.  Good luck with that George!

If a general election takes place in a scenario where Brexit has not been realised, then George will obviously be smashed by the Brexit Party.  If Brexit has occurred, then they will both be deemed irrelevant (as were UKIP following the Leave vote).  Of course Galloway's motives are two-fold.  His decision to parachute into Watson's seat is as much about trying to silence Corbyn's most troublesome opponent as it is about Brexit.  Why isn't he challenging the hideous Yvette Cooper?  After-all, George has a Yorkshire pedigree, so to speak.  He was the MP for Bradford West (2012-2015) and Cooper's 69 per cent Leave voting constituency is just down the road.  The truth is that wherever he stands, his chances of winning as an independent are naturally slim.

Galloway is crowdfunding his West Bromwich campaign, pleading for donors via his full array of social media accounts.  At the time of writing he is just short of £5k.  Not bad for less than 24 hours, but where's your own financial input George?  What happened to all the wealth you garnered as an MP over a 26 year career?  What about the libel awards and the reported £300k you earned outside Parliament in just one year?  TalkRadio and Russia Today salaries?  Book sales?  Social media?

Then again, what could be more socialist than squandering other people's money rather than your own? 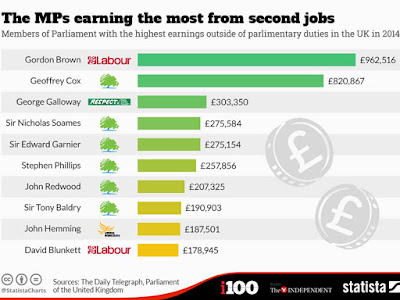