Labour and its allies continue to use the most absurd language in relation to our new Prime Minister.  The words 'racist' and 'hard right' have been deployed by various party figures and their media friends in recent days, in fact Corbyn himself this afternoon described Johnson's cabinet as "hard right".  Well, let's look a bit closer at the new cabinet and see how it compares to Jezza's front bench.

The left adores identity politics, it cannot help but define its enemies by race, religion, gender and sexual orientation.  The fascination with identity is such that quite often it forgets its own identity and it appears that Labour has fallen hideously short in this respect.  Boris Johnson knows this only too well, as did his predecessor.  When Theresa May addressed the Commons for one last time as PM she congratulated the new Lib Dem leader on her victory.  May pointed out that with Jo Swinson in place every major party had now been led by a female except one. 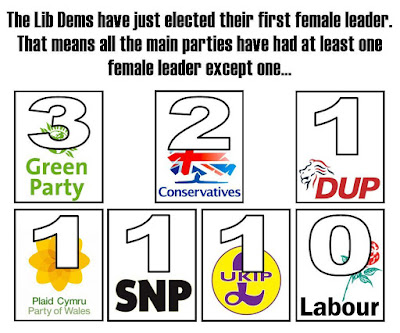 It's also worth nothing that Sinn Fein, the SDLP and even Change UK have had female leaders.  It was a good parting shot from May and Labour had no comeback.

Fast forward 24 hours and the new PM was busy assembling his new cabinet.  All the senior positions are now filled, including the Great Offices of State.  For the positions of Chancellor, Home and Foreign Secretaries, Boris chose the son of Pakistani Muslim immigrants, the daughter of Gujarati Hindu immigrants and the son of a Czech Jewish immigrant.  To put this in perspective, these three appointments alone equal the full ethnic quota on Corbyn's front bench.  However, Johnson wasn't finished there and added James Cleverly (Chairman), Kwasi Kwarteng (Business, Energy & Industry), Alok Sharma (International Development) and Rishi Sunak (Chief Secretary to Treasury).

This is now the most ethnically diverse cabinet Parliament has ever seen.  Meanwhile, Corbyn has Diane Abbott, Dawn Butler and Valerie Vaz on his front bench team.  So much for Boris the 'racist'.
at July 25, 2019