Just when you think you've heard it all there's this... 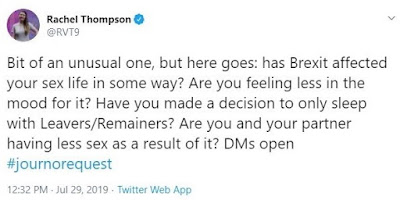 The resulting article (entitled How Brexit Destroys Sex Lives) is something to behold.  Apparently Remainers are so disgusted by Brexit voting partners that they are abstaining from sex and even filing for divorce.  Rachel writes:  Stella voted Remain in the 2016 EU referendum and describes herself as "strongly pro-free movement and travel".  So, when her husband told her he thought "Brexit was fair" she decided to file for divorce.  That sounds reasonable.  Not.

It's interesting to note that all the Remainers that Rachel has quoted appear to be extremely intolerant of people with different views to their own, while the two Leavers she quoted aren't bothered either way.  That says everything about snowflake remoaners, which is ironic considering they are the first to accuse others of intolerance.  This is probably not the conclusion that is supposed to be drawn from this bizarre article, but there you go.
at July 30, 2019