The latest Parliamentary attempt to stop Brexit from happening was voted through by 315-274.  The cross-party motion, proposed by Tory Alistair Burt and Labour's Hilary Benn, was designed to prevent the next PM 'proroguing' Parliament in order to ensure we leave in October.  16 of Burt's Tory colleagues voted with him in securing the motion, including the usual suspects Dominic Grieve, Sam Gyimah, Justine Greening, Oliver Letwin and Guto Bebb.  Margot James quit her ministerial post in order to back the motion, but given that she'll be out of a job next week anyway (should Boris win) it's no great sacrifice for her.  There were numerous abstentions and absences for the vote, most notably Ken Clarke.

The DUP voted against the motion, but there were only two other opposition MPs who voted with them.  One was Ian Austin, the former Labour MP, and the other is still a Labour MP (for now).  Can you guess who it was? 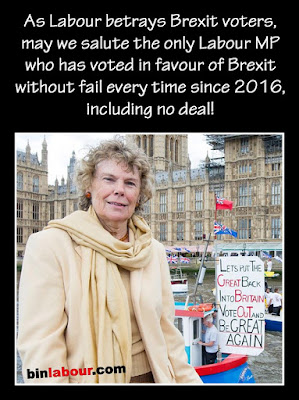 That's right, despite all the bluster of Labour's recent 'Leave converts' the only Labour MP to vote down the motion was the one and only Kate Hoey.

Rotherham MP Sarah Champion said only three days ago that she would back no deal if it came to it.  "We have to leave" she told Politics Live.  Two days later she voted in favour of a motion that would block no deal.  Disgraceful.  What of Caroline Flint, Melanie Onn, Ruth Smeeth and Stephanie Peacock?  All of whom have recently voiced support for the Leave mandate.  Every one of them supported the motion.  Disgusting.

It just goes to show that no matter how they talk, you just can't trust a Labour MP.  If Britain does leave in October and a general election is the next step, here's to a Parliamentary breakthrough for the Brexit Party across the Labour heartlands.  Bye bye two-faced pretend Leave converts and bye bye unapologetic Remainers like Yvette Cooper and Mary Creagh.
at July 19, 2019