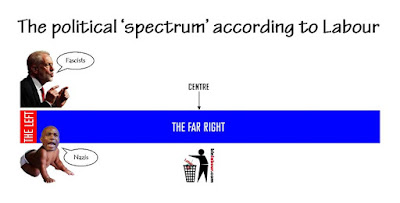 Labour fought this year's European elections on the 'basis' that UKIP and the Brexit Party were 'far right' - seriously, that was all they had.  Dave Lammy said that comparing Brexiteers to 'Nazis' was not "strong enough" - the rantings of a lunatic.  Years ago it was the BNP and the National Front who were the far right, but the rise of the hard left in Labour has led to the parameters being expanded to include almost anyone who isn't a Corbynista.  Earlier this year we said it wouldn't be long before the left started labelling the Tories 'far right'.

In the absolute catastrophe that Corbyn and his hard left chums got into power we would have expected the opposition to be branded far right on a daily basis.  This is just communism at its power-mad best, but it looks as if we won't have to wait that long before the left begins tarring the Tories as far right, in fact why not go further and accuse them of aspiring to 'ethnic cleansing' eh, Owen Jones? 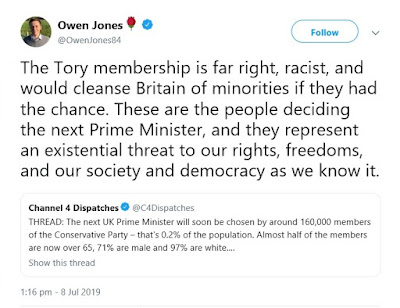 Little Owen has cooked up a classic tweet there and if the Great Leader ever comes to power we will do well to recall this.  The Tories represent a threat to our rights, freedoms and democracy?  Bless, the lad worships Marx and yet appears to have precisely no knowledge of what misery and lack of rights, freedoms and democracy that the practices of Marx have wreaked upon the world.  He should go and speak to some older people in the eastern bloc and ask why they collectively celebrated the collapse of the Berlin Wall?

We'll quickly skip over the fact that Gordon Brown - the last Labour Prime Minister - didn't even face a leadership election, let alone a general election.  This is just too easy and hugely embarrassing every time Labour criticise the manner of May's succession.  We'll move on to Owen's fascination with identity politics, in this instance race.  It's funny how the left are always bleating on about how 'racist' we are on the right, but it is in fact themselves who are totally obsessed by race.

Turning Point's Esther Krakue had a few words for the wee lad.