The extraordinary turn of events this week relating to Jared O'Mara have taken another twist.  Despite everything that his former PR man did and said about him on Twitter, the pair appear to have reconciled and the MP is going to take a break while he seeks help for mental health issues.  Gareth Arnold tweeted about their meeting yesterday, less than two days after he had called his former employer a "degenerate prick", among other things. 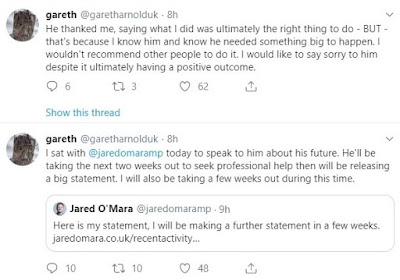 Obviously mental health is a serious matter, but there does appear to be a pattern with O'Mara using health problems to excuse his position as arguably the worst MP the UK has ever seen.  If things are so bad why doesn't he resign and allow someone better equipped to represent the voters of Sheffield Hallam?  We all know the answer to that question.  It's easy money.

O'Mara has now released a statement in which he displays all the characteristics of a spoilt millennial.  It is mostly a rant against the Labour party and Jeremy Corbyn, as if they are somehow to blame for his predicament.  This deflection and inability to accept responsibility for one's actions is sadly a theme for the modern age.  If his former party is to take any blame whatsoever, it is for selecting this hapless individual as a Parliamentary candidate in the first place.  Perhaps this episode, like the Onasanya scandal, will persuade them to be more careful with their selection process in future.

O'Mara's statement in full as follows.

In a few weeks, I will be making a follow-up statement regarding my position, until then I will be taking time out to receive professional help to deal with my mental health and personal issues regarding self-medication.  During this time I would appreciate you could give myself and family privacy.

This is what I would like to say in the meantime:

I would like to start by apologising to my family, my friends and my constituents.  I have not been honest with you about the depths of my depression and self-loathing.  When I started this job in 2017 I was a different man: a confident and passionate man that wanted to help others.  Sadly, I was unable to do that because very quickly I was bullied and mistreated in a harsh and unforgiving environment and that led me to be weak.

I wasn't even meant to win the election.  I stood because I wanted to give my time to support the democratic process and because I was inspired by Jeremy Corbyn and everything he had to say. Particularly about "Equality and Fairness".  I voted for him twice, was a member of his group 'Momentum' and practically idolised him.

But I got no support from him or the National Labour Party during the campaign.  The previous Labour candidate Oliver Coppard (who I think should be the MP for Sheffield Hallam and I think is a top bloke) got funding and support nationally but I did not.  The efforts of a small group of dedicated grassroots activists working to help me with the campaign I lead won that election for us.  I will always be grateful to those amazing volunteers and all who voted for me.  I don't get many people backing me, helping me and supporting me in my life so it means so much when you do.

One person who constantly snubbed me and treated me less favourably than other people was Jeremy.  He was the biggest shock of that election; not my victory.  He has not been the man I thought he was nor that he appears to be.  To the point that he and his team lied to you all last year.  I was never let back in the Labour Party as they said.  Nor was I ever ordered to go on training or "warned".

Within months of my appointment as MP for Sheffield Hallam the smears happened and I fell into a self-destructive nosedive.  During my suspension Sam Matthews his team were consummate professionals but then Jeremy's office took over the case and I had to get a solicitor involved because of disability discrimination in order to get it back on track.

The discrimination made things even worse.  My mental health deteriorated further and I isolated myself from family, friends and constituents.  My actions became erratic and my thoughts became incoherent to the point where most recently I suffered a delusional episode.

In May this year, I sent an email to Theresa May and Jeremy Corbyn asking them for help with getting Equality in parliament.  Some MPs were parents who were not getting support and Maternity/Paternity cover and I wasn't entitled to my rights under the Equality Act for adequate support for my disabilities and as such was not provided with the safe and necessary environment for me to speak in the chamber.  This was to serve as my olive branch to Jeremy for the bullying he and his staff had put me through which caused me to leave the party in July last year.

Jeremy and his office then offered me a meeting by letter and by my parents' observations I was visibly excited.  Jeremy’s office then promised to get in touch with me and offer a selection of dates on a certain day but did not fulfil their promise, so I emailed the next day and let my disgust at their disrespect be known.  Jeremy's response was to make false reports about me being a mental health danger around parliament with a delegation of Labour safeguarding representatives and his staff.  I know this because I have it in writing from the parliamentary doctor.

I was not then a mental health risk at that point but such gaslighting ultimately made me one.

About two weeks ago I told a staff member I was in love with her during the aforementioned delusional episode.  I'd been paranoid for weeks that if I was mad like Jeremy and his team said I was then I'd do something like that.  The messages I said that were not of a sober or rational mind and felt like an out of body experience when I sent them but I know that does not excuse my actions because I should not have been self-medicating with a drink to get into that state.  It was my lowest point and I will be apologising personally to her and her family.

I want to become a better person again; like I was.  I feel I’ve become unrecognisable and I want to make amends.  I need treatment for my mental health and rest first though.  I will make a further statement about my future in a few weeks.

Lastly, to my dear, old friend - the Noel to my Liam - Gareth: Thank you for sticking with me like I am sticking with you.  How anyone put up with for this long is a mystery!  That's what mates should do. I wish you a good break, you have earned it.

I am so sorry to everybody for everything.  You have put up with so much; all of you all my staff, my family, friends and constituents.

Thank you so much,