THE HOUSE OF SHAME

It is a great irony that a place in which members are referred to as 'honourable' is so seriously lacking in 'honour'.  It no longer comes as a surprise when disgraced members cling to their membership like barnacles on an old boat, or should that be gravy boat?

Last year we had one of the most inept and useless MPs in the history of the Commons suspended by his party, then reinstated before resigning in order to sit as an 'independent'.  Jared O'Mara was surely selected as a paper candidate with no thought given to him actually unseating Nickolarse Clegg, and thereafter proving himself to be way out of his depth when he surprisingly defeated the Lib Dem.  However, the young lad now has access to all the generosity afforded its members by the House of Commons.  So, instead of resigning from a job he cannot do, he chooses to cling to the gravy train and make the most of its perks before he is deposed as the 'honourable' member for Sheffield Hallam at the next election.

What of his predecessor?  Well, if anything exposes how corrupt and self-serving our political elite is, it is the fact that he is now to be known as 'Sir' Nickolarse Clegg.  Knighted in the New Year's Honours List of 2018, just six months after being dumped by his constituents in favour of O'Mara, for 'political and public service'.  He had been an MP for twelve years.  Perhaps it was a pay off for going to bed with the Tories in 2010, either a backhand requirement of the coalition deal or just the political elite looking after one of their own.  We'll never know, but it soured the entire 'honours' system for even its most ardent supporters.  That word again - 'honour'.  Dished out over the years with such random and numerous disregard, with little thought or consideration about what the word means and what it has carried throughout history - 'knight' - the harsh reality is that someone who refuses to have the title bestowed on them possesses more guts and honour than the bunch of politicos, singers and sports people who roll up to collect them.

Now, back to the gravy train of Westminster.  As if we didn't already know how disgraceful the Houses have become in recent years, up pops the fairly anonymous member for Peterborough - Fiona Onasanya.  Perhaps, like Jared, the party never imagined she would defeat the incumbent (the Conservative Stewart Jackson).  Alas, she did.  A little more than twelve months after her surprise victory Onasanya was charged with perverting the course of justice.  She was convicted last month and will be sentenced in the coming weeks.  Is she still an MP?  Of course!

Now perhaps it is a case of individual arrogance and not necessarily a sign of the overall decline of our political system, because this lady does indeed possess it in abundance.  Asides from her aspiration to be Britain's first black Prime Minister (pause for chuckle), she bizarrely compared herself to Christ and his disciples following her conviction.  However, these proceedings followed hot on the heels of the Kate Osamor fiasco, who still reportedly has her convict son on the payroll in Westminster.  Yes, symptomatic of a bigger picture alright.

Yet there are those who empower such shameful and dishonorable individuals.  Owen Jones, for instance, has excused the actions of Osamor's son, instead blaming the 'right wing press' for trying to bring down the MP (and of course, it's because she's black).  No, Owen, she has brought herself down, or she should have done by now.  But doing the honorable thing and falling on one's sword is not the way of Westminster these days.  Today the Peterborough Telegraph went one step further in legitimising such shameful behaviour. 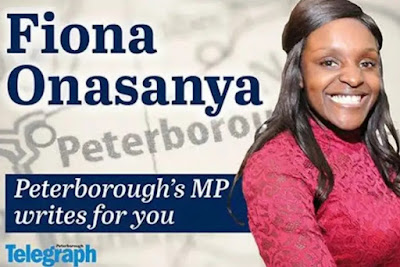 In a move that will surely alienate many of its readers, the Telegraph features the convict as a guest columnist!  Already alarmed at the fact their local MP is a criminal, imagine their dismay when they see said criminal staring back at them from their local rag as a contributor?  Although the editor acknowledges these concerns at the top of the article he doesn't even bother defending his decision.  This is normalising what should be universally condemned.  And in any case who in their right mind is asking the question "I wonder how our disgraced local MP is going to vote on Tuesday"?  According to the Spectator, Onasanya appears to have been absent from the Commons since Christmas, making further mockery of Parliament and the ludicrous editorial decision of the Peterborough Telegraph.

Onasanya will only lose her seat if she is receives a sentence longer than twelve months.  Unlikely, but a custodial sentence of less than a year and she can be ejected by way of a petition.  It's a long drawn out process that frustrated one of our supporters to such a degree that he applied for a petition of his own.  Simon, from Yorkshire, posted a petition on the Downing Street website calling for MPs who are found guilty of crime to be removed from office.  Well, just look at the response he received on being told his petition was being rejected. 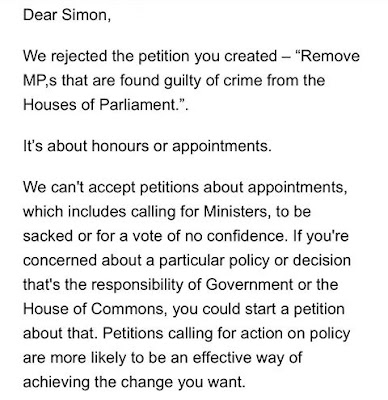 The petition made no mention of "Ministers", and it was not about "honours or appointments" or "government policy" either.  Did the recipient even read Simon's petition or is this just another example of the establishment looking after its own?

Unprompted, a customer said to me the other day that they could see no wrong in a modern day Guy Fawkes proceeding to wipe Parliament (and its parasitic inhabitants) off the map.  It's becoming increasingly difficult not to sympathise with such a sentiment.
at January 12, 2019