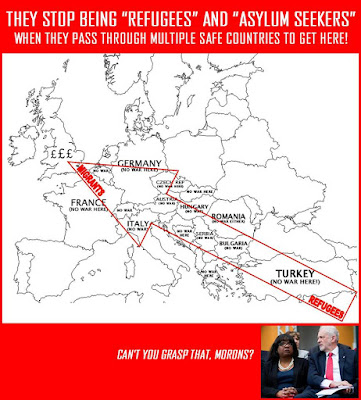 The Home Secretary came under fire last week for daring to question the motives of migrants sailing across the English Channel to reach our shores.  How dare he suggest that they weren't legitimate asylum seekers?  Jeremy Vine featured the 'controversy' on his phone in show, Yasmin Alibaba-Brown fumed and Labour MPs were 'outraged'.

As per usual the hysteria was contrived to suit the open borders agenda.  Borders are 'oppressive' and not 'progressive' in the eyes of the lunatics running the BBC, the Guardian and the Labour Party.  Labour wants to abolish our borders as more migrants means more Labour voters.  It's the same logic that drives the Democrats' opposition to Trump's border wall.  Liberals like Alibaba-Brown and leftists like Owen Jones have massive chips on their shoulders and see mass uncontrolled immigration as a tool with which to decimate white Blighty.  They're so consumed by hatred they don't realise the aggressive ideology they're importing will be the death of them too.

Shared a whopping 18,554 times, the above meme is an early contender for the next Twelve Memes of Christmas list.  The 2018 list will be published on here in full later today, or you can see it on the Facebook page here.
at January 06, 2019