THE LEFT UNLEASHED ON FIONA BRUCE

Following Diane Abbott's disastrous appearance on Question Time last week the hard left online hate machine went into overdrive.  Of course it was nothing to do with Diane's ineptitude, but all down to the bias and lies of the presenter, Fiona Bruce, and good old-fashioned racism.  Predictable to say the least.

Now Derby is largely a Labour town, it even elects one of the hardest left MPs in Parliament - Chris Williamson - but this audience was 'wacist' according to Diane and her supporters.  They were 'whipped up' into a frenzy of hate towards her in a pre-broadcast session directed by none other than Fiona Bruce herself!  However, no proof of this exists and one of Diane's fellow panelists has categorically denied it happened (as does Bruce and her BBC employers).

Such is the hate being directed towards Bruce since that night that she has reportedly been advised to stay off social media and hide her home address.  By the way, Owen Jones, we thought all the hate in this country came from the far right?  Just saying.

In last night's Question Time the presenter took the unusual move of responding to the furore over Abbott's appearance.  Thankfully, it was not quite the apology demanded by Momentum, but merely a clarification of a remark made by Bruce about opinion polls.  As you can see from the table below it can be very confusing as to what the polls are actually saying.


Why anyone is still discussing opinion polls at all is a mystery, particularly given the fact they have been largely discredited in recent years.  Who can forget the predictions of a Tory landslide in 2017 and the expected Remain vote of 2016?  The final big poll ahead of the Scottish referendum predicted a narrow victory for Yes and yet it swung the other way considerably.

The polling issue is a moot point, but it was a tool with which the hard left could beat Bruce with.  After that they had to make stuff up, a bit like Owen Jones and his far right phantom menace.  The truth is that this whole affair is just another rattle being thrown out of the pram.  The left has had it all their way on Question Time for years.  Despite claims to the contrary, the audience is nearly always overwhelmingly to the left.  Anyone can see that.  The panel is ALWAYS skewed in favour of Remainers.  If anyone has been 'bullied' on QT over the years it has been the many solitary right-leaning representatives.  The one time a leftie gets jeered and the left go into meltdown, making up conspiracy theories and denouncing the presenter as a 'Tory' and a 'racist'.  Laughable. 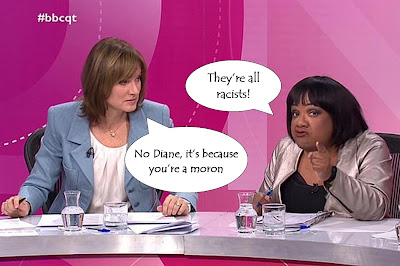