THE BBC AGENDA IS UNDENIABLE 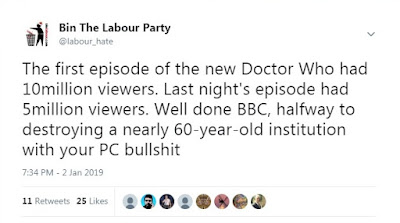 Men, white people, fathers.  That is the demographic under attack repeatedly in the most recent series of Doctor Who.  Yes, the beeb has turned Britain's longest running sci-fi show into one long feminist and all-round leftist rant.

I'm a Peter Davison man myself.  Back in the day my Doctor grappled with the likes of the Master and the Daleks each week, unhindered by earthling political ideology.  It was just a simple battle between good and evil.  Nowadays the Master is a woman and so is the Doctor.  Jodie Whittaker's Doctor occasionally tackles aliens, but the writers seem more preoccupied with injecting their own political beliefs into the storylines and this means the villains are by and large white male earthlings.  The misandry is particularly directed at fathers for some unknown reason, so strong is the hatred that race is no longer a factor here (in the last episode a black father came in for some heavy lectures too).  There was even a Brexit reference, as it was blamed for closing down U.N.I.T (an aspect of the show since 1968, but jettisoned to make a cheap political shot).

Although the occasional feminist reference was thrown in during the Capaldi years, the latest series has gone into overdrive, apparently driven by it's new showrunner Chris Chibnall.  The female actress he appointed as the lead is also a self-confessed feminist.  Showing just how much respect these people have for the history of the show, Whittaker stated in an interview that the original classic run merely celebrated the "white male gaze".  What a way to endear yourself to the loyal fanbase!

And what about those fans?  Well, if you believe what you hear in the press, the new Who is going down a storm with fans and Whittaker can do no wrong.  However, if you go onto YouTube and look at some of the fan videos you may get a different story.  Review sites such as Rotten Tomatoes also paint a different picture.  Just look at the disparity between what the 'critics' say about Doctor Who and then what the audience thinks. 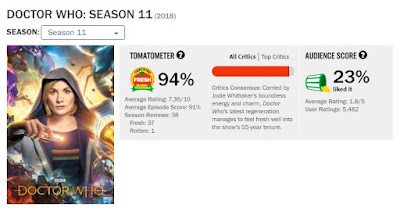 So while 38 establishment critics gave the latest series 94% on average, more than 5,000 viewers gave it just 23%.  Some have alleged that 'bots' are to blame for the low audience score, but on closer inspection most of the negative reviews are actually the most detailed and the accusation falls flat.  When one looks at the New Year's Day episode the disparity between critics and viewers is even greater... 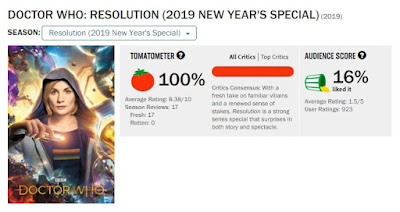 So biased are the media in representing this new politicised Who that their reviews for this episode currently stand at an astonishing 100%!  Contrast this with the paltry 16% score of ordinary viewers who watched the show at home, clearly flabbergasted by yet another political lecture taking the place of their favourite sci-fi.

The audience figures are also at odds with the media portrayal of 'triumphant all-conquering' feminist Who.  The first episode of the latest series drew in almost 11 million viewers, but the numbers crashed by a whopping two million the following week!  The figures steadily declined through the whole series, with just a negligible increase for the finale.  The special New Year's episode was watched by little more than 5 million.  So while Chibnall and Whittaker are glowing in their perceived glory, the reality is somewhat different.  Talk about sci-fi, it's almost as if they're on another planet.

The BBC just can't help itself.  It has become an extension of the university campus, populated increasingly by individuals who have a political axe to grind and can't help bestowing the rest of us peasants with their 'superior' ideals.  From panel shows to news broadcasts to beloved science-fiction - white-bashing, male-baiting, anti-Brexit, genderfluid PC indoctrination is the way forward for the beeb.