Diane Abbott had a torrid time on Question Time this week.  She was one of four Remainers on the panel, but when it came to Brexit she was hapless.  Of course she is not helped by the fact her party leader continues to sit on the fence over Brexit, while many of his colleagues stamp their feet for a second referendum, and now he refuses to speak to the Prime Minister in a woefully misjudged dead-end tactic.  A savvy politician would still manage to polish over these obstacles, but alas Diane is not savvy in the slightest.  Every time she gives an interview or takes part in a panel show it is like watching a car crash in slow motion.  In short, she is fucking useless.

No doubt having eyed all the negative media surrounding her latest display, a statement was released on Friday evening by her spokesperson.

"We are appalled by the treatment of Diane Abbott on BBC’s Question Time. It was clear that a hostile atmosphere was whipped up, propped up by reports of inappropriate and sexist commentary in the audience warm-up session.  A public broadcaster like the BBC should be expected to be a model of impartiality and equality.  The BBC cannot claim anything of the sort when analysis of the programme shows that the only black woman on the panel was jeered at and interrupted more times than any other panellist, including by the chair herself.  The media must stop legitimising mistreatment, bias and abuse against Ms Abbott as a black woman in public life.  The BBC should be ashamed that their programming is complicit in such behaviour".

OK, so let's break this down.  No-one can substantiate these 'reports' of inappropriate and sexist commentary.  Did it actually happen?  Doubtful.  The host of Question Time is now a woman, there were more women on the panel than men and none of them have made complaints.

"Analysis of the programme shows that the only black woman on the panel was jeered at more times than any other panellist...".  Yes, of course she was.  But it was nothing to do with her ethnicity or gender, it was because she is a bumbling idiot trying to justify reprehensible politics.  "The BBC should be ashamed...".  No, you should be ashamed for once again pulling the race card to detract from yet another moronic performance in front of the cameras.

How many times Diane? 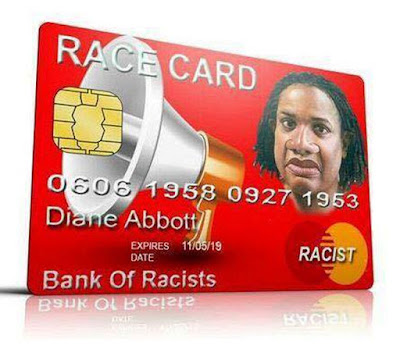