In what has become a familiar and entirely predictable response, the hate campaigners of the left have been laying into the 'Labour 14' ie. those rebels who defied the party whips to reject the Cooper amendment.  John Mann and Ian Austin have received particular attention because earlier this month they voted for May's Brexit deal and as we know anyone who dares to side with the government is earmarked a 'traitor' and put on the watch list.

According to some Corbynistas socialism is not compatible with Brexit.  Clearly George Galloway didn't get this message, or Dennis Skinner.  Neither did the Socialist Party of England and Wales, or the Communist Party of Britain, or the Socialist Workers Party - all of which campaigned for a Leave vote.  Paul Mason, the loony leftie freelance journalist formerly of both the BBC and Channel 4, went one step further and accused the rebels of being 'xenophobes'.  Bet he wouldn't say that to Skinner's face. 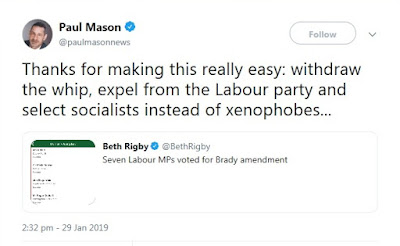 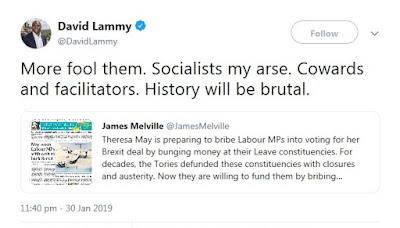 Her Majesty's call for 'common ground' is clearly falling on deaf ears in the Labour ranks!
at January 31, 2019