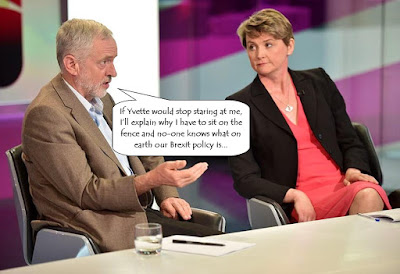 Jeremy Corbyn left it as late as possible to get behind Yvette Cooper's Brexit-blocking amendment (she says it wasn't about blocking Brexit, but only a moron would believe that).  He probably hoped that by leaving it so late in the day it would attract as little attention as possible so close to the vote.  After all, he has pursued a rigid fence-sitting strategy for a while now, in the vain hope that he can placate both sides.  You can't blame him.  While most of his MPs would dearly love to reverse Brexit, many of them represent heavily pro-Brexit constituencies.  Such as Yvette Cooper...

One wonders why it fell to Yvette to propose this amendment.  She was rubbing up against a 70% Leave vote in her constituency and despite a personal plea in her local rag last week it was always going to fall on deaf ears.  Tory Brexiteer Dominic Raab made a very polite mockery of her position ahead of the vote (see below).  It's probably no coincidence that it was Yvette who put her name to this.  She is undoubtedly one of the most elitist politicians on the opposition benches, someone who started off her political career working for Bill Clinton, before rising through the New Labour ranks and expertly ripping off taxpayers during the expenses scandal, something which should have tarnished both her and Ed Balls, but both have led successful careers since.  So, probably a degree of arrogance on her part.  In any case, her amendment failed!


Yes, the insidious attempt to extend Article 50 and ultimately block Brexit, was voted down by 321-298 votes.  An earlier motion put forward by the Labour Party to try and stop us exiting with no deal was also voted down, by a slightly larger margin 327-296.  So, all in all a disastrous night for Corbyn and Labour, capped off by a humiliated Jez finally agreeing to meet Theresa May (after his big sulk backfired on him).
at January 30, 2019