You may be forgiven for never having heard of a United Nations document entitled the 'Global Compact for Safe, Orderly and Regular Migration', but you need to know about it.  Its ultimate aim is to make migration a universal 'human right' and to criminalise negative 'migration speech'.  It is best summed up in the video below by Dutch MEP Marcel de Graaf...

Naturally, the UK government has already given it the 'thumbs up'.  The petition below reached 10,000 signatures almost ten days ago, but the government has still not replied.  Let's get it to 100,000 so they will have to listen!  Please click on the image below and sign the petition. 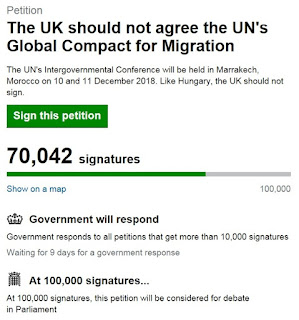