It would have been very easy to divert from the Twitterverse for this week's award as there has been so much Labour twittery at large in the real world.  First there was 'stupidwomangate' and Corbyn's return to the chamber only to lie about it.  This was followed by the conviction of Peterborough MP Fiona Onasanya for perverting the course of justice.  Fiona responded by sending her colleagues a biblical message comparing her situation to that of Christ and his disciples...


"I am in good Biblical company along with Joseph, Moses, Daniel and his three Hebrew friends who were each found guilty by the courts of their day. ... Of course this is equally true of Christ who was accused and convicted by the courts of his day".

Labour withdrew the whip immediately and urged her to resign.  At the time of writing, she hasn't.

No, this week we've elected to stay with Twitter and, for the second time this year, name loony Lord Adonis 'twit of the week'. 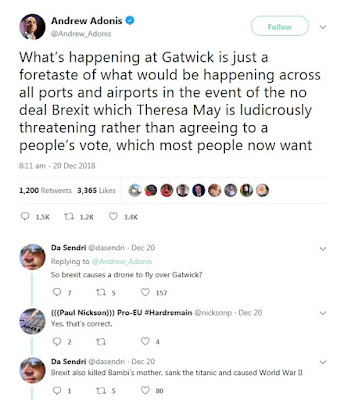 With his outlandish Brexit claims, the remain-obsessive is on a par with Labour colleague - barmy Ben Bradshaw - they are both convinced the referendum was 'stolen in a Russian plot'.  We didn't think Lord Adonis could surprise us again, but exploiting the Gatwick drone saga and linking it to Brexit is almost off the scale.  Apparently planes will be grounded on March 29th!

At the time of the screencap above the top response to his tweet was from user @dasendri.  This invoked an apparently straight-faced (and equally barmy) response from @nicksonp to which @dasendri replied with an infinitely superior quip.  Top trolling.

Unfortunately we can no longer troll Andy Adonis directly because he blocked us some time ago.  You can run, but you can't hide.  Snowflake.