Labour politicians have been falling over each other to signal their patriotic footballing virtues to the Twittersphere.  Yet again Keir Starmer tasked someone with photo duties as he watched England beat Denmark in controversial fashion (it wasn't a penalty, let's be honest).  Interesting to note that Starmer and his entourage appear to have risen from their seats seconds after the goal went in, as the TV screen shows the players celebrating next to the corner flag.  Ordinary people tend to punch the air and cheer when the goal goes in.  Clearly, as with his pictures from the last match, this is staged. 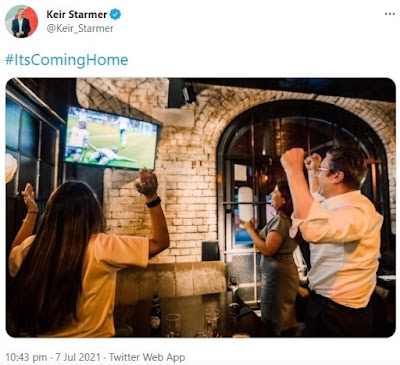 There was a mixed response to Starmer's latest embarrassing photo op...
"Try watching a game of football without taking ur poor photographer with u I beg u" - @crawf
"Goal. Photo. Edit. Post. Share. Cringe" - @ChrisPislost
"You've showed more passion in the past two hours than you have at the dispatch box for the past 15 months" - @boycalledhorse
"Bandwagon jumping at its best" - @mdj097
"No masks? Thought u were begging to keep them on" - @whites29
Starmer's face mask hypocrisy was seized on by several users.  "Where's your mask ya Tory" asked @RyanRankell1.  "You don't need one when you're sitting at a table in a pub!!!" replied @ClemwalkD4.  "He's not sitting" came the brutal reply to end that little exchange.
It's an absurd rule to suggest that the virus only operates above chest height in a pub or restaurant, but these are the rules that politicians like Starmer have dictated that the rest of us plebs follow.
Needless to say, many left-wing and Remainiac users responded to Starmer's tweet by declaring they would be supporting Italy in the final.
Dave Lammy didn't fair much better than Starmer with his own piece of virtue signalling.  Sharing a video from inside the ground, Dave suggested that England fans were the best in the world... 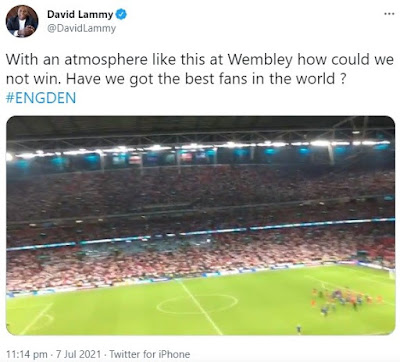 Lammy had clearly got carried away and had forgotten that many of these same fans routinely (and rightly) boo their own players when they take the knee.  Last month Lammy told his LBC listeners that such fans were "a disgrace".  Oops.
Furthermore, the fans had not exactly covered themselves in glory elsewhere in the game.  From booing the Danish national anthem and Danish possession, one fan even shone a laser pen in the face of the Danish goalkeeper as he prepared for the England penalty kick.
A dumb tweet from an even dumber bloke.
at July 08, 2021