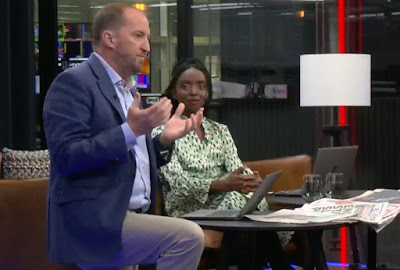 The GB News presenter who took the knee live on air earlier this week has reportedly been suspended by the broadcaster.  On Tuesday ex-BBC reporter Guto Harri declared: "Everyone should take the knee".  He then got down on one knee in front of his shocked co-presenter Mercy Muroki.  Harri was standing in for Colin Brazier.
Last night GB News tweeted that Harri had committed 'an unacceptable breach of our standards' and he was nowhere to be seen on Friday's shows.  The Daily Mail reports that the channel's director of programming has since quit in response to Harri's suspension.  John McAndrew is himself a veteran of the BBC, but has also worked for Sky and ITV.  His wife Daisy McAndrew also contributes to GB News, although it is not clear if she too will leave the station.
Meanwhile, on Friday evening GB News chairman Andrew Neil tweeted the following...